On Sunday, July 24, 2022, riders made history by starting the inaugural Tour de France Femmes avec Zwift in the shadow of the Eiffel Tower in Paris and crossing the finish line on the Champs-Élysées. It was a beautiful start to the eight-day stage race, which will take the athletes through the north and east regions of France over 1,032 km, 13,140 m of elevation gain, two mountain stages, and 23 climbs.

Liv signed on as a major partner of the Tour de France Femmes, sponsoring the Best Young Rider classification signified by the White Jersey. Following each of the eight stages, a young athlete will be awarded the jersey, inspiring other young riders and future talent to pursue their professional cycling dreams. An overall winner will be announced at the end of the race. 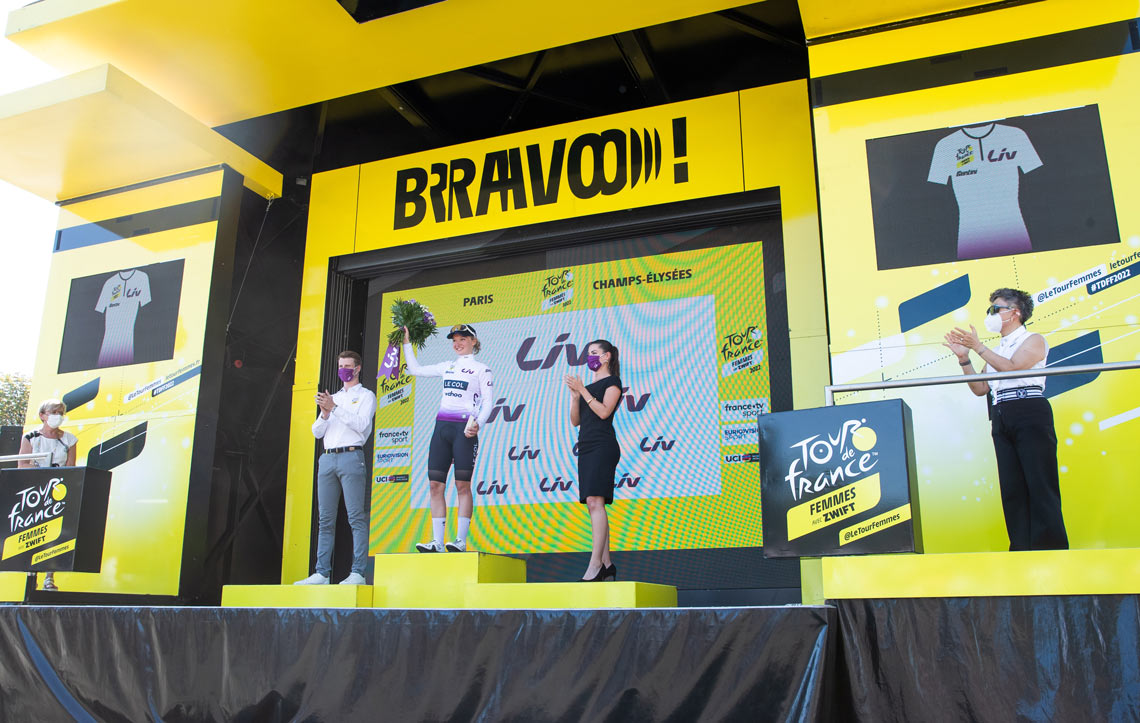 Bonnie Tu, Liv founder and a global pioneer in women’s cycling, is representing Liv at the Tour de France Femmes. Tu presented the White Jersey award to the first winner of the White Jersey, Maike van de Duin, at the conclusion of the first stage and will ride in the ProAm on Wednesday, July 27 alongside Liv Racing Xstra team rider Ayesha McGowan and Chelsie Tan, team rider from Team BikeExchange-Jayco. The first Taiwanese woman to be invited to ride in the ProAm, Tu’s participation is symbolic of her leadership position and prominence as one of the most influential women in the cycling industry.

“Since Liv was founded, our goal has always been to help advance women’s participation in cycling, so sponsoring the inaugural Tour de France Femmes avec Zwift was a natural extension of our mission,” said Tu. 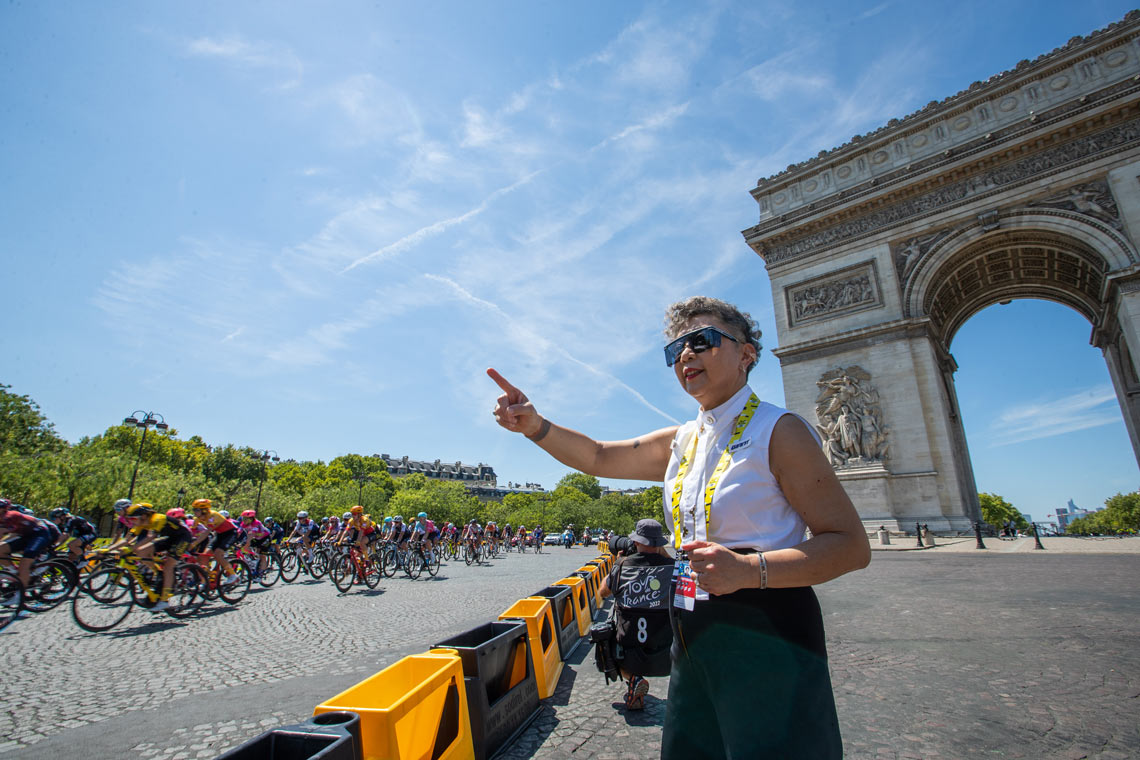 Liv Racing Xstra and Team BikeExchange-Jayco, Liv’s two professional women’s teams, are represented in the Tour de France Femmes, vying for victories throughout the 8-stage pro race aboard the Liv Langma. Rachele Barbieri has already sprinted to a fourth-place finish on stage one and eighth on stage two. For the remaining stages, watch for Thalita De Jong and Silke Smulders, a white jersey contender from Liv Racing Xstra. Race contenders from Team BikeExchange-Jayco include Kristen Faulkner and Alexandra Manly.

“Giving women the chance to compete in the most prestigious race in road cycling shows young girls they too can achieve their dreams and aspire to compete at cycling’s highest level—something Liv has been committed to since day one,” continued Tu. 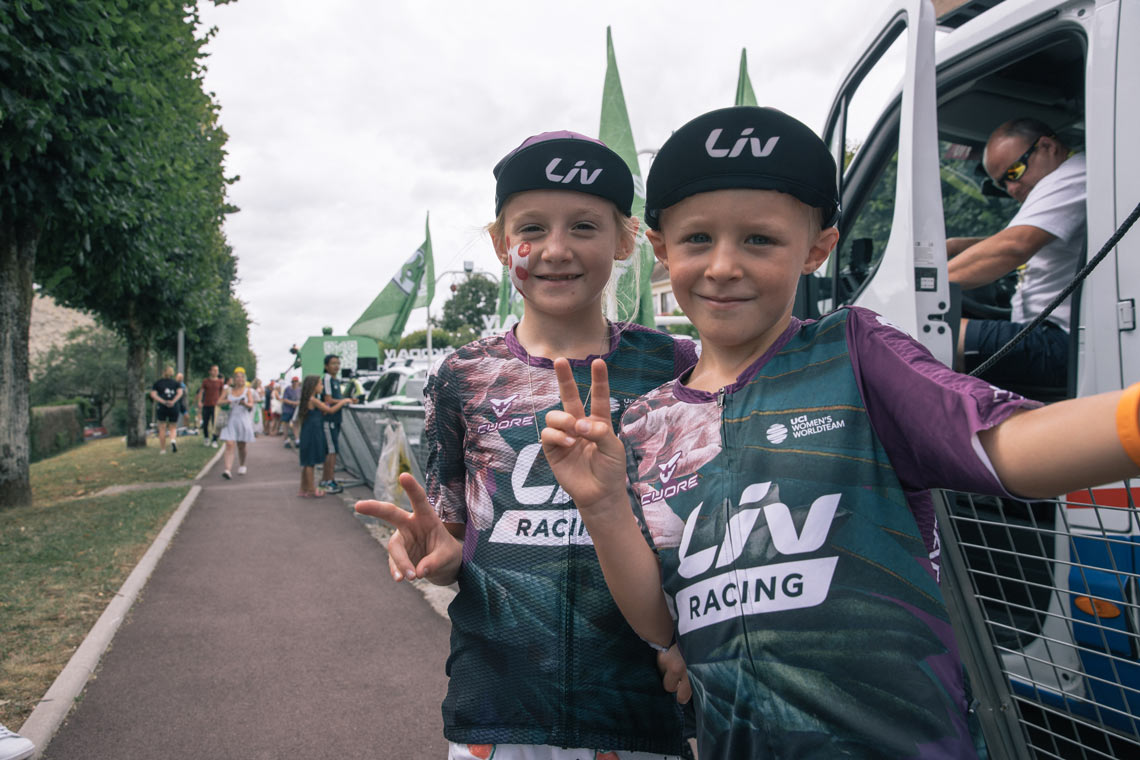 The inaugural Tour de France Femmes avec Zwift will have the most media coverage of any women’s road cycling race to date. It will be broadcasted July 24-31 in more than 200 countries around the world. Visit https://www.letourfemmes.fr/ and select “broadcasters” at the top of the page to find a broadcaster in your country.

To learn more about the Tour, its history, and to meet Liv’s athletes, visit www.liv-cycling.com/herecomesthefuture.