The Camino de Santiago, also known as the Way of Saint James, is a network of pilgrims’ paths containing dirt roads, walking trails, and roads from throughout Europe to the cathedral of Santiago de Compostela in northwestern Spain. The routes have become popular cyclists and walkers and as a spiritual path. Sandra Reyes Coronilla of the Liv Trail Squad toured from France to Spain on the historic route on her Liv Tempt mountain bike. 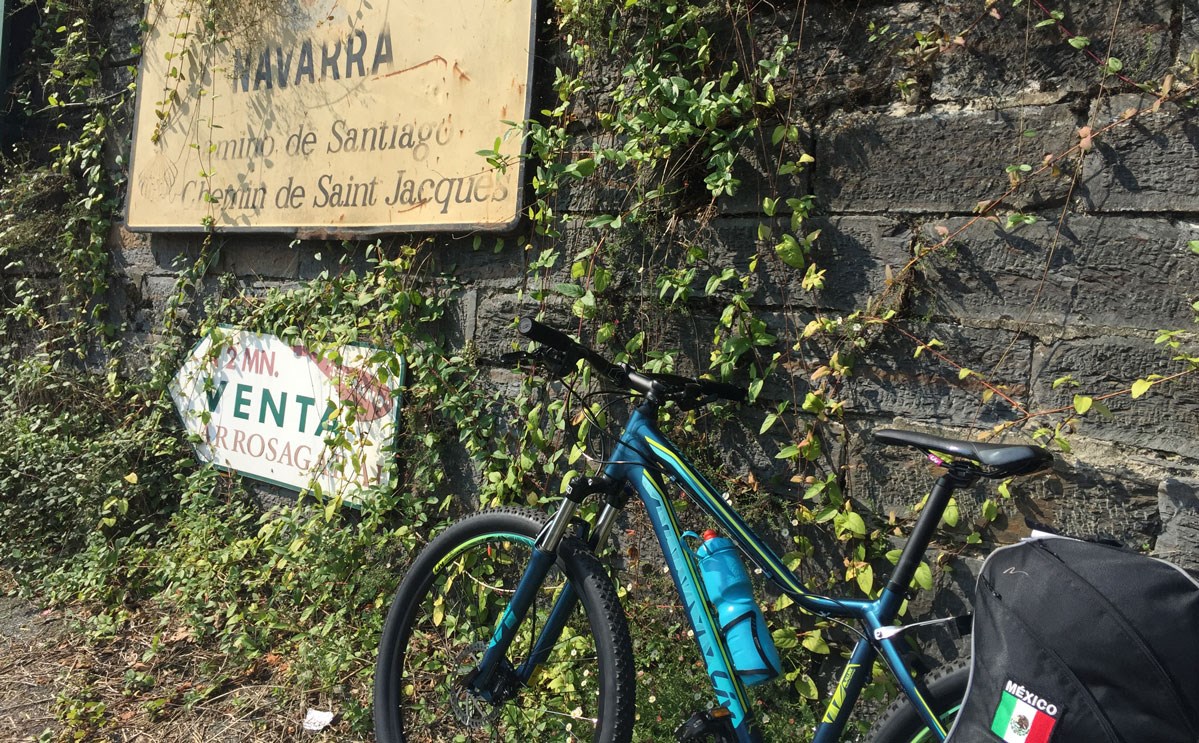 Like everything in life, there’s always a margin for error. So of course, I began my adventure through Europe half a day late. I forgot to reserve a place for my bike on the train and lost my ticket!

“These things happen for a reason,” I thought to myself. But, in the back of my mind I was frustrated and nervous I would not be able to finish my journey to Santiago, Spain from France.

The delay allowed me to tour Paris by bike, visit the Eiffel Tower, and spend time with my friend Paola and her husband who live in Paris.  After securing my bike reservation and ticket for the next day to Bayonne, France, I felt much better. I did not miss the train this time!

I arrived in Bayonne and put together my bicycle that had been packed in a bike bag just in time to make the bus to Saint Jean Pied de Port, France. Without further mishap, I was at my destination with blue sky and fabulous weather to welcome me as I started my journey to Santiago. 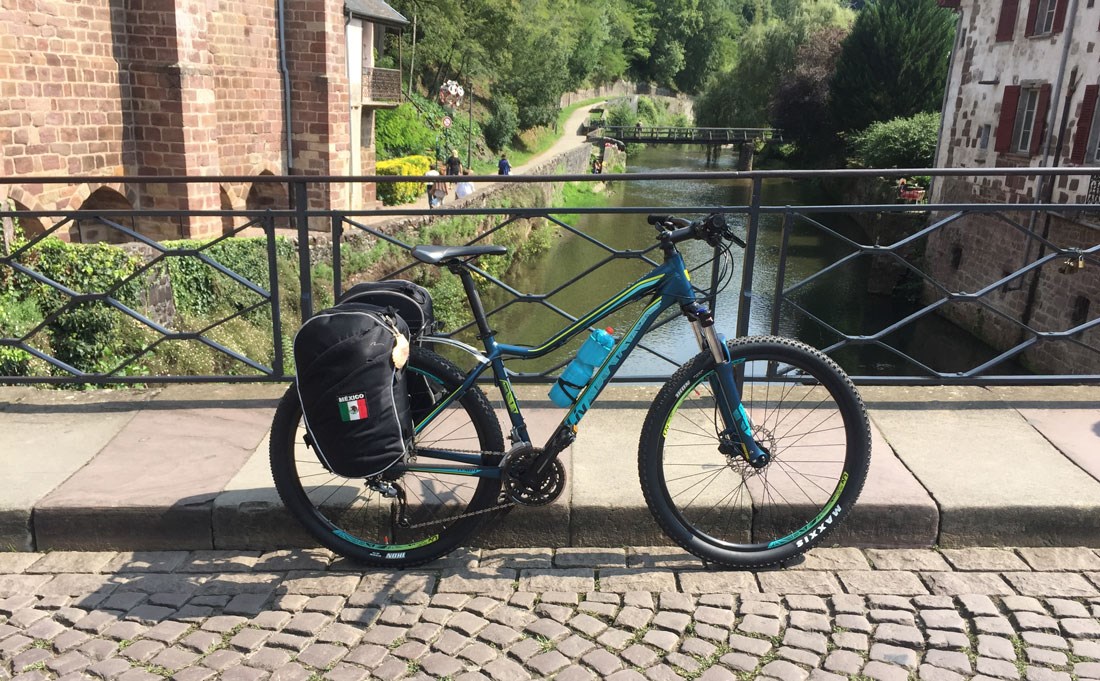 People from all over the world were at the pilgrim’s office in Saint Jean Pied de Port to start their adventure on the Camino de Santiago. Most of them were walkers, but there was also one other cyclist. I was informed the next day would be rainy, so I made the decision to start my trip right then. I hurried to eat an energy bar and drink some wáter… and I was off on the first stage of the Camino de Santiago. I could not believe it was finally happening!

The first stage was 30 kilometers with about 18 kilometers of climbing through the Pyrenees on a winding road with an incredible landscape. Shortly before the end of the day, I caught up to two Italians, Antonio and Sandro, who were part of a group of six also starting their Camino de Santiago pilgrimage. I thought no one would be crazy enough to be starting their ride as late in the day as I did, but I ended up finding six!

The hostel in Roncesvalles was the first stop, but there was no place to sleep there so I would have to keep looking. Again, I found myself running into the Italians and together searched for and found a hostel to stay in for the night. We woke to a rainy day and, considering the route planned for the day, I decided to accept the Italian’s invitation and ride with them. It was the start of a great friendship – from that moment they adopted me as part of their group for 12 days. 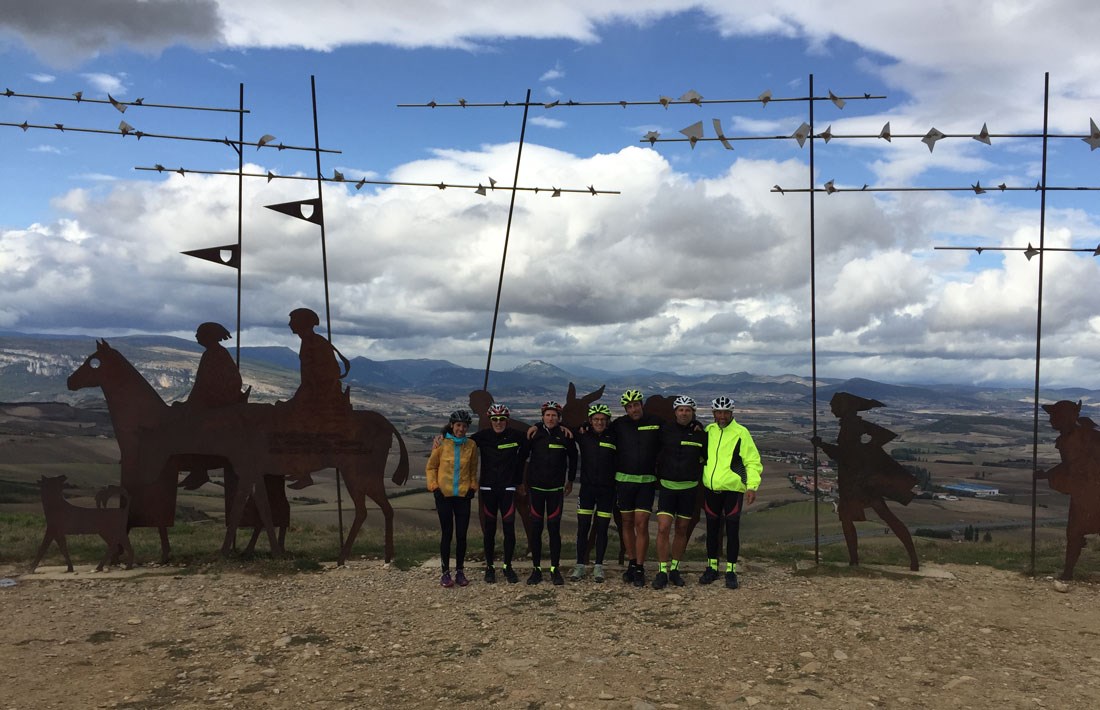 I once read a phrase that I remember perfectly: “Si nadie te quiere acompañar ve solo, ya encontrarás personas en el camino.” It says, if no one wants to accompany you on your journey, go alone, you will find companions on the road. I had no idea this would happen to me, but it did on the Camino de Santiago. I arrived alone and on the trip, I met great people who would become my friends. When my plans were initially delayed and I couldn’t get on the train, it was fate that had made other plans for me.

Every day was a different story, a fresh start, landscapes, faces, smells, colors, tastes, new villages, and cities. The second day we road 80 kilometers through Pamplona, climbed to Alto del Perdón and arrived at a town called Lorca, a quaint and chilly little village. 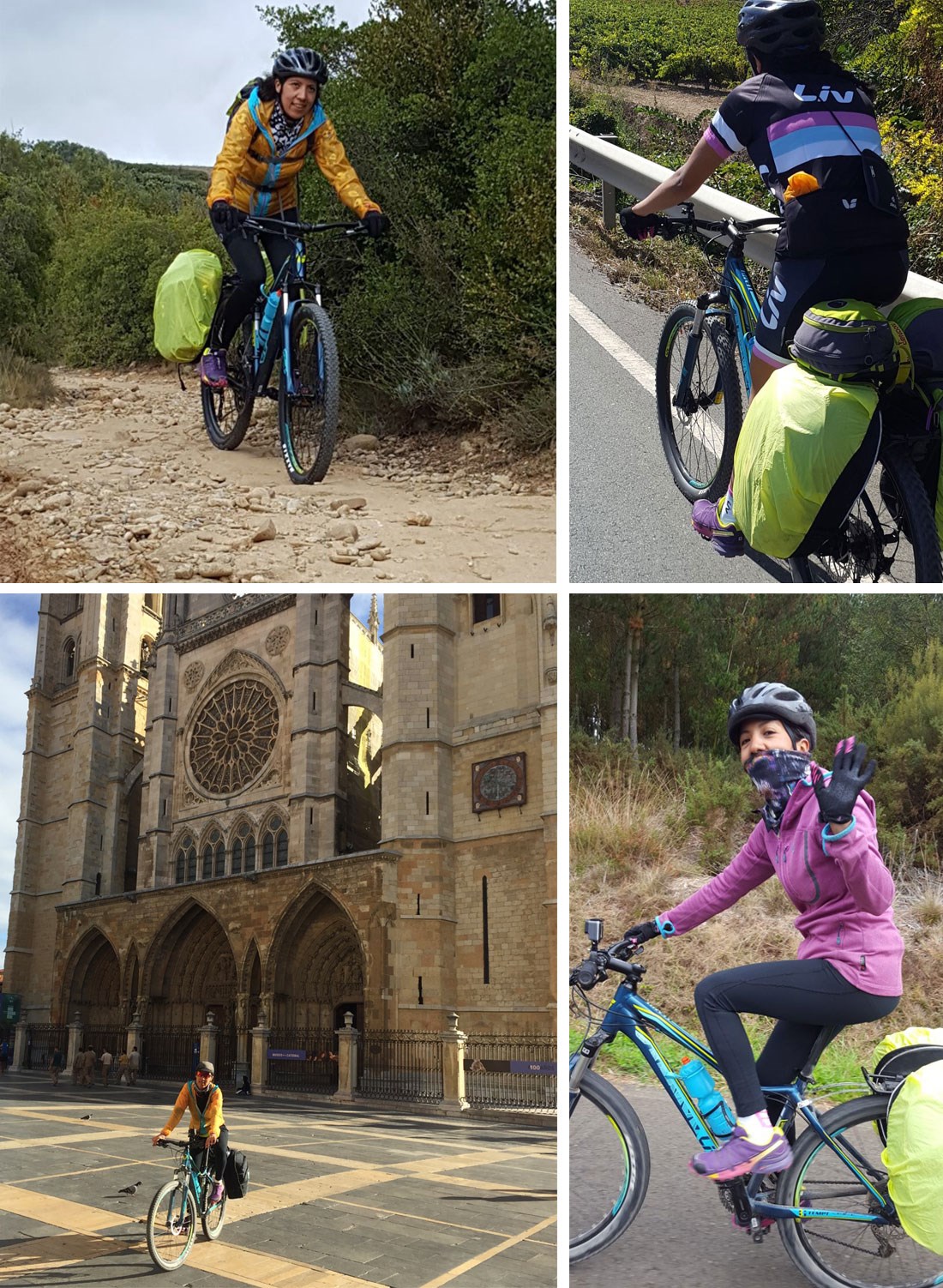 The following days after Lorca we continued to enjoy great landscapes, climbing up and zooming down mountains. We had the luck of riding on some of the roads that had been used during a stage of the Vuelta a España a few days before. I knew because on the road were the names of the cyclists who had raced the event Contador, Quintana, Froome, Nibalí, among others.

The longest day of the trip was 123 km from Villa Franca to Carreón de los Condes. That day’s ride was longer than expected because the village we were supposed to stop at didn’t have water. We decided to continue on to Carreón which made the day much longer. In addition to the added kilometers, it was the hottest day of the whole trip.

So kilometer after kilometer, I was fulfilling my goal. I saw many beautiful cathedrals along the way – in Pamplona Burgos, the wonderful gothic architecture in Leon, Astorga and its surroundings, and the climb to the Iron Cross carrying a small stone to make a wish, as tradition goes. And finally, I came upon the cathedral of Santiago de Compostela.

On a rainy day, my journey came to a very emotional finish in the square of Santiago. I could not contain the tears of emotion for having been able to make the bike route after so long without doing something like that. 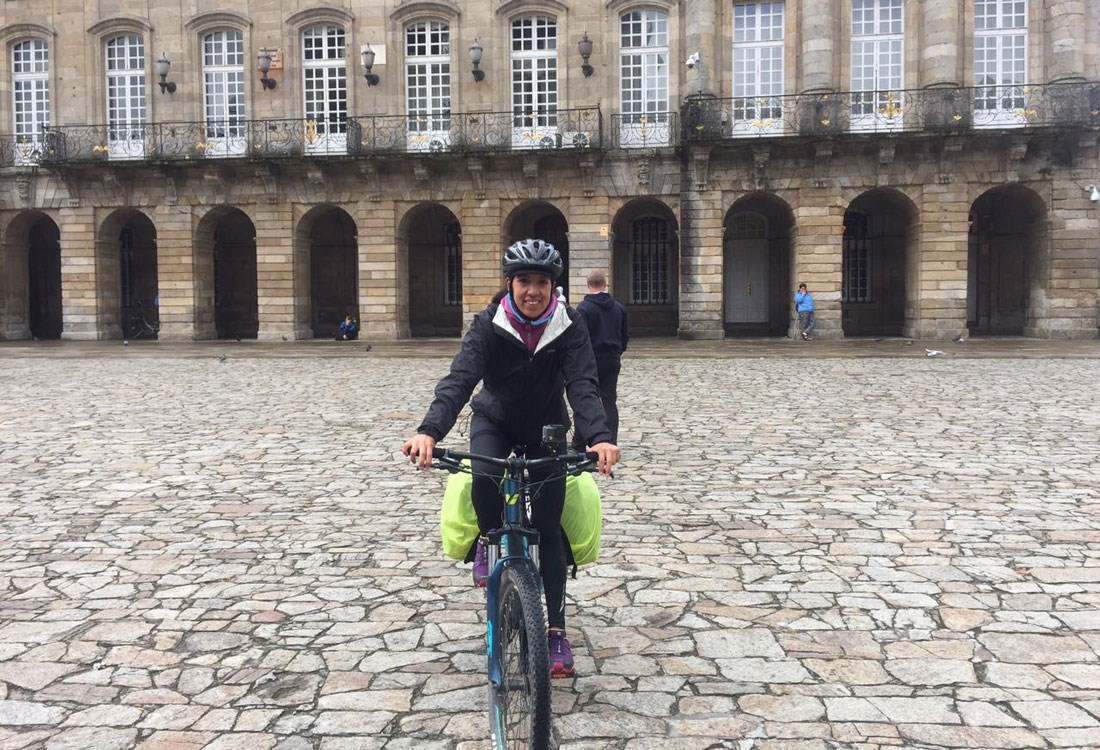 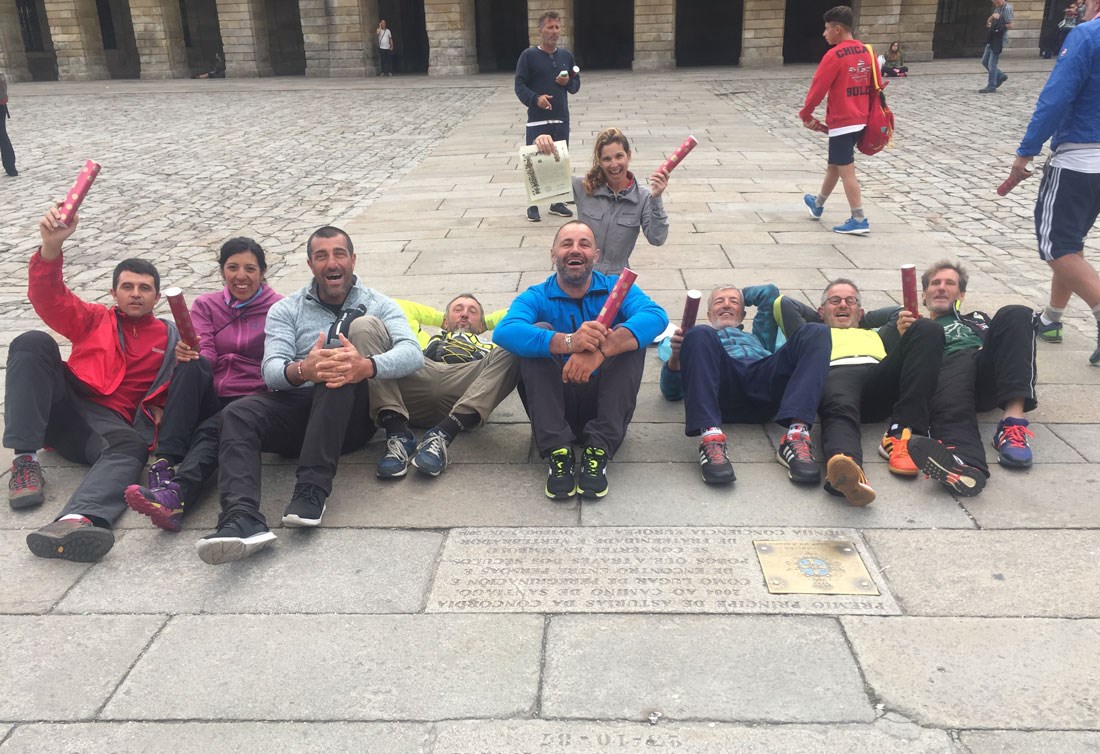 During a long bike ride, mental endurance is often more important than physical preparation. Physical exhaustion will come, and the only way to continue and achieve your goal is to work on your inner strength. No matter how hard the road is, you can get there if you take it one step at a time.

Completing this trip had a special meaning to me, not just as a physical achievement, but a spiritual one as well. A year and a half ago, I underwent surgery to remove a tumor. The recovery was slow and it took about three months to return to making any sort of physical effort and over a year to feel back to normal. Even then, my body had changed.

Maybe that was the push I needed to decide to make the trip to complete the Camino de Santiago this year. I decided to stop postponing projects and live in the moment. It has certainly been a magnificent reunion with myself and the bicycle after that bitter year.

This trip in Spain by bike was an adventure that exceeded all my expectations. It was fun, tiring, exciting and surprising. Being able to travel a country by bike has an inexplicable magic that enables you to continue despite fatigue and reach the end. Since I began planning this trip, I was not sure where my journey would end. I wasn’t sure how my body would react after several days of intense riding. But, I did it. I made it all the way to the sea by bike. 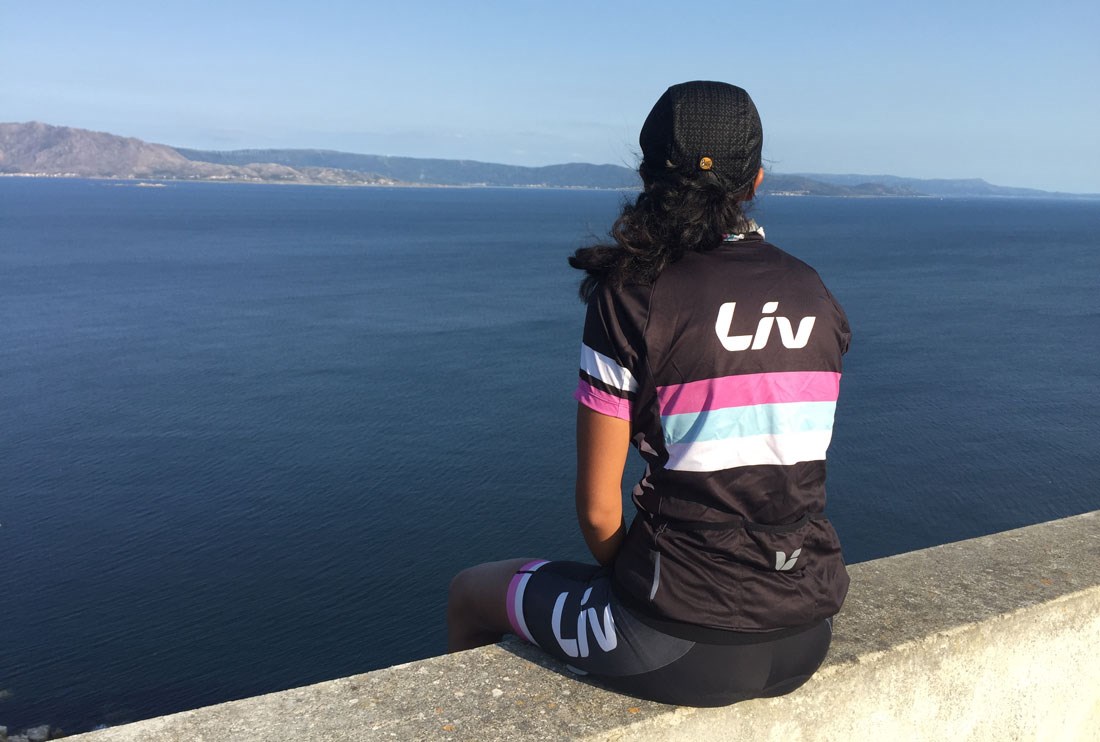