As you stand at the gas pump on your way home from work, you see her—hair flapping in the wind from under her helmet, briefcase strapped down behind her on a rack, smiling as she easily keeps pace with the car in front of her. You think to yourself, “I wish that was me, but bike commuting seems like so much work.”

Actually, you can commute by bike! At first, it may take a little effort to remember to bring extra shoes and figure out how to cope with helmet hair. Pretty soon though, what once felt like work will dissolve into a liberating routine. Just like that, you turn the most dreaded part of the day into the most prized.

Biking to work saves you money, improves your mood and helps balance out all those hours spent sitting behind a screen. It’s just a matter of getting motivated and making the logistics easier. We caught up with a few of our favorite Liv Ambassadors and employees to ask them why they got started and what keeps them stoked on their bike commute.

Meet 4 Women Who Get There By Bike 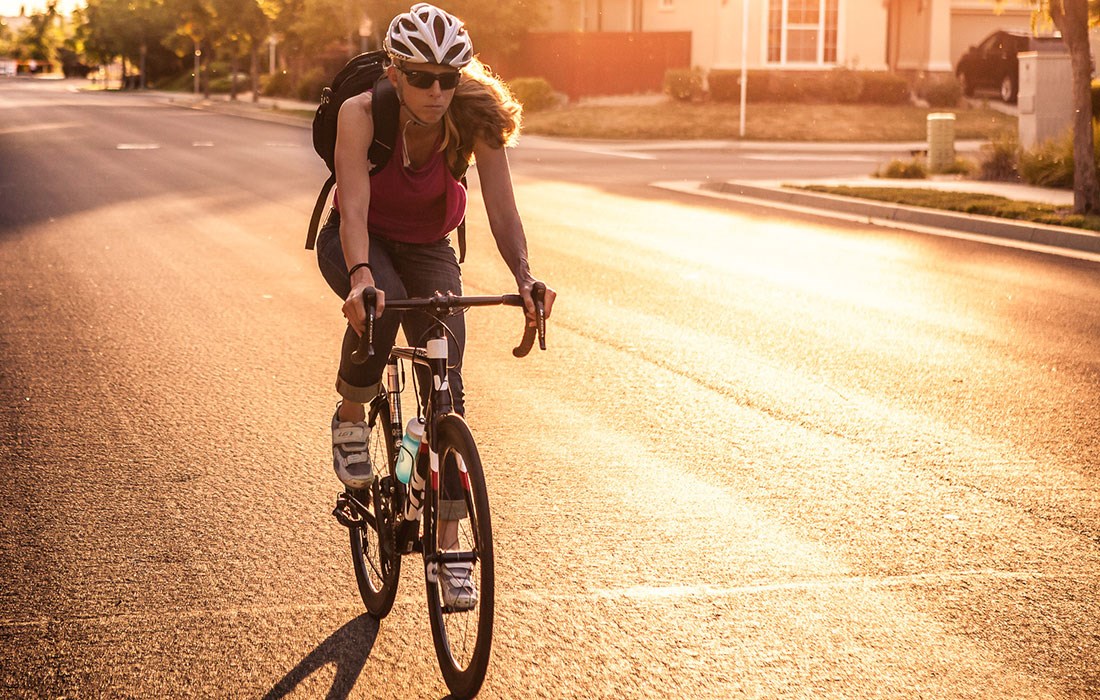 Stephanie is a Kindergarten teacher who bikes to work about three times a week in Roseville, California on her Liv Envie Advanced Pro road bike.

Liv: How many miles do you rack up during the week?

Stephanie: On a normal day, it is 5.4 miles each way. If there is a lot of afternoon traffic, I will take the country roads home which makes it a 9.8 mile return trip. So, roughly 30-40 miles a week.

Liv: Why did you start commuting by bike?

Stephanie: I have commuted by bike on and off for 7-8 years, but I recommitted to biking to work on a more regular basis early this spring when I read that only 0.38 percent of the 128.3 million commuters in the US bike to work (US Department of Transportation 2015). It made me realize that I am missing a huge opportunity to get active in a leisurely way each morning. As an athlete, most of my exercise is geared towards prepping for a race. I rarely get the opportunity to ride, run or swim in a casual way.

Liv: What is your favorite thing about bike commuting?

Stephanie: It helps me get organized! If I want to ride into work I need to prep my breakfast, lunch and gear the night before. So not only do I get to enjoy the fresh air before work, I usually arrive earlier and stress-free because I prepared for my day ahead of time.

Liv: What is your must-have commuting accessory?

Stephanie: I don’t usually wear bike clothes on my commute, since I live so close to work—so, my must have apparel item is skinny leg jeans. No one wants chain grease on their pants! I also bring two bottles. One has my latte to reheat at work and the other has two hard boiled eggs. I could put them in a different container, but one day I put them in a bottle because I couldn’t find a container and that has been my go-to ever since.

Stephanie: I wouldn’t call it a crazy story, but I did forget my shoes once and had to wear my bike shoes around at work. Luckily, they just sounded like stilettos clacking down the hallway.

Liv: What advice would you give to someone who is interested in commuting by bike?

Stephanie: Start by mapping out possible routes on your computer. When mapping out your options, it is important to consider distance, traffic volume and road conditions. Don’t rule out a route just because it is longer. Some routes are longer but are more pleasant and safer. After you mapped out your options ride them ahead of time. This will give you the opportunity to see look for hazards such as potholes but also gauge how long the ride will take. 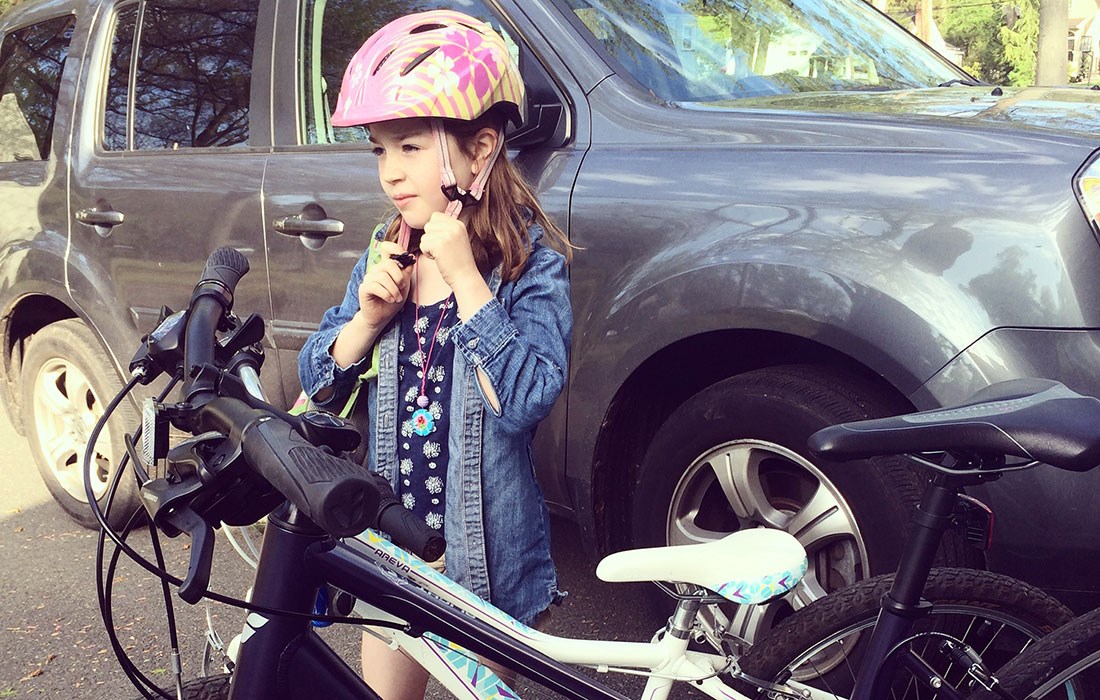 Jen is a full-time mom, so her daily commute involves getting her children Aiden and Abby to and from school on time and in one piece! Abby commutes on her Liv Areva and Jen escorts the kids on her Liv Alight.

Liv: What does a normal commute look like for you?

Jen: We try to ride to school most days, unless it is raining or when it gets too cold (winter can get pretty frigid where we are outside of Newark, New Jersey). The ride is 1 mile each way, which means the kids ride 2 miles a day, usually 4 days a week. 8 miles a week is a pretty solid number for these kids! I get double that, since I will ride to and from the house dropping them off and picking them up.

Liv: Why did you start riding to school instead of opting for the carpool line?

Jen: My neighbor Denise (who has an older son) suggested it when my daughter Abby first started attending the elementary school. At first Abby, Denise and her kids would ride bikes, while my son Aiden and I road scooters (he was still rocking the training wheels and wasn't confident on the bike yet for the full commute). After lots of practice and patience, Aiden finally graduated to two wheels & we've been a really cute bike gang ever since! We've even influenced others in the neighborhood to start riding their bikes!

Liv: Why do you love commuting with your kids?

Jen: Without a doubt, the best part about commuting is watching the kids have fun and just be confident on two wheels! They really enjoy the sense of freedom riding a bike provides, but have also grown to appreciate the need to be safe. As a parent, you can't ask for anything more!  And, the fact we can do it as a family is bonus quality time.

Liv: What is your #1 piece of cycling gear?

Jen: A helmet, of course!

Liv: Has anything wild ever happened on your commutes?

Jen: One time we were chased down by the neighborhood cat!

Liv: What do you tell other parents looking to commute by bike with their kids?

Jen: Safety first! Most commutes will involve routes that intersect with cars. Learn how to safely navigate those situations by taking a bike safety class. Then if possible, find others to commute with—there is always safety in numbers!

Stacie uses her bike to get pretty much anywhere she needs to go, whether it’s the grocery store, work or a party! Her Brava SLR has proven to be the ideal bike to get her to and from work and everywhere in between in hilly Pittsburgh, Pennsylvania.

Liv: How many commuting miles do you rack up in a week?

Stacie: On a given day, I will ride between 4 to 15 miles during my commute to and from the University of Pittsburgh, where I work. I get anywhere from 50 - 100 miles Monday - Friday. If it's nice out, I’ll go the long way (backpack and all), but in the winter I’ll keep it short. Last year I rode a little less than 4000 miles total and the year before I road almost 5000 miles!

Liv: Why do you commute by bike?

Stacie: I started commuting because I was tired of paying for parking! A friend had recently started bike commuting, which made me think I could do it, too. I'm in a much better place (most of the time) when I can start my day with a bike ride.

Liv: What are some items you would never leave home without?

SJtacie: I never ride without my Chapstick, Garmin or lights.

Stacie: I have stopped at the grocery store many times on my way home from work. One time, I was able to fit 2 rump roasts in my backpack—when there is a BOGO (Buy One Get One) sale on meats, you have to make sacrifices. That was one heavy backpack.

I have also been known to stop by the liquor store on the way home and can attest that at least 2 bottles of wine will fit in my backpack.

Liv: Do you have any advice for prospective bike commuters?

Stacie:  I would tell anyone to make sure they know and follow the traffic laws. Familiarize yourself with the streets and ride smart. Make sure you are well lit and cars can see you. Most importantly, ride with confidence and know that you can do this! It's very a freeing and enjoyable to be able to get yourself where you need to go. 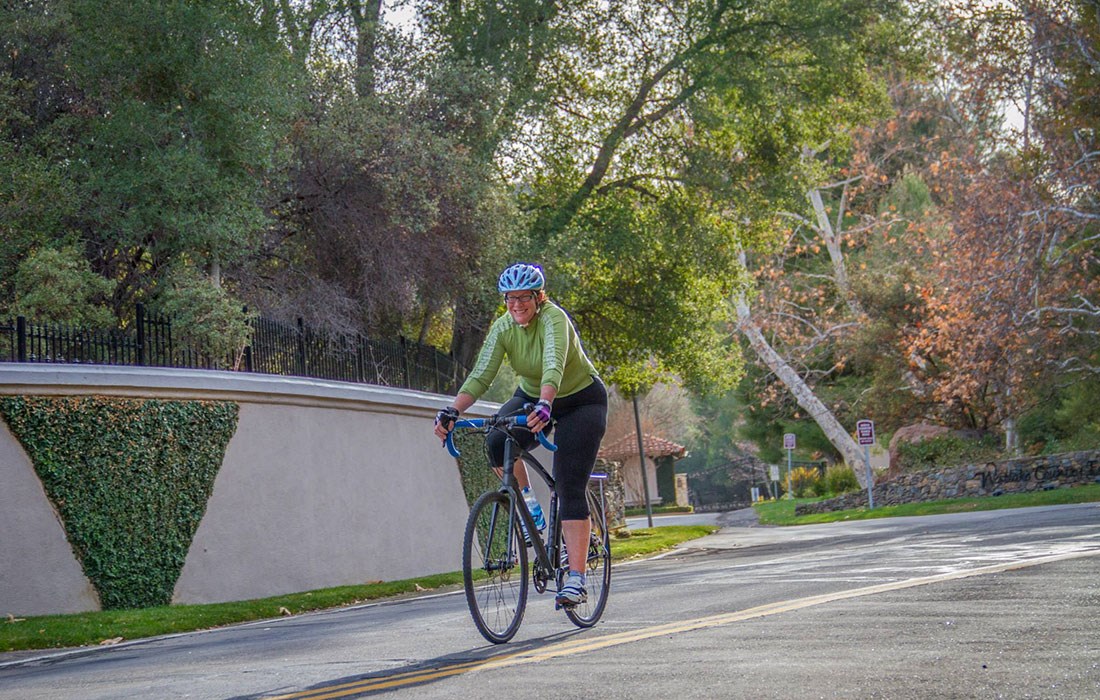 Jolie began commuting by bike in college and has been addicted ever since! She now resides in Thousand Oaks, California and commutes to Newbury Park, California where she works for Giant Bicycles as a part of the retail services team.

Liv: What is your weekly mileage?

Jolie: I commute 3 days per week on average at about 20-25 miles per day, depending on the route. My goal is 100 miles per week.

Liv: What is your favorite thing about bike commuting?

Jolie: Commuting by bike is the best stress reducer ever. Any worries from my day are gone by the time I get home.

Liv: What are your go-to commuting accessories?

Jolie: Good lights are a must-have. I am also addicted to my Liv Ricca Merino jerseys! I have both colors in the short sleeve AND long sleeve versions.

Jolie: For many years, I rode in street clothes because I didn’t want to be a bike nerd in Lycra. When I finally started gearing up, I didn’t know a lot about bike specific apparel. I bought a Gore-Tex cycling jacket to wear in rainy Seattle and I used the guide I knew from fashion that outerwear should be 2 sizes larger than normal size, in order to fit over everything. So, my cycling jacket was basically a spinnaker! It was so big, I could put it on over my fully stuffed backpack and still zip it up. Super aerodynamic.

Liv: What advice would you give to someone who is interested in commuting by bike?

Jolie:  Be smart and safe, but don’t be intimidated. Bike commuting is fun and soooo worth it!

We hope these women will inspire you to get out and commute by bike! Tell us your craziest commuting story on social media! On Instagram @LivCycling #ActuallyICan #LivBeyond and Twitter @Livgiant!