Allysa Seely is a two-time World Champion paratriathlete (2015/16) and 2016 Paralympic Gold Medalist. Known for her competitiveness and determination, Allysa’s fierce spirit has led her to conquer several hurdles during her life. But, in July 2017 she faced one of her biggest challenges yet when her triathlon season was derailed by complications from a chronic illness. This is her story.

It was the day I had marked on my calendar since January 1.  My only race with a clearly defined outcome-based goal: defend my World Championship title. I was there and I was about to step up to the start line, but not in the form I had expected just a few months earlier.

Seven weeks before World Championships, I was hit with devastating circumstances that should have ended my season. In four weeks, I underwent six abdominal surgeries, spent more than twenty days in the hospital and was left with multiple incisions. My chronic illness, Ehlers-Danlos Syndrome, had caused gastroparesis which made it difficult to maintain weight and fuel my body properly. The resulting complications, including gastrointestinal perforation, were serious and I would need time to heal. The doctors gave me a recovery time of 12 weeks and no hope for a comeback in time for Worlds. My mind knew I should focus on healing and come back next season, but in my heart, I thought, "If there is even the slightest possibility I can race... I have to try." 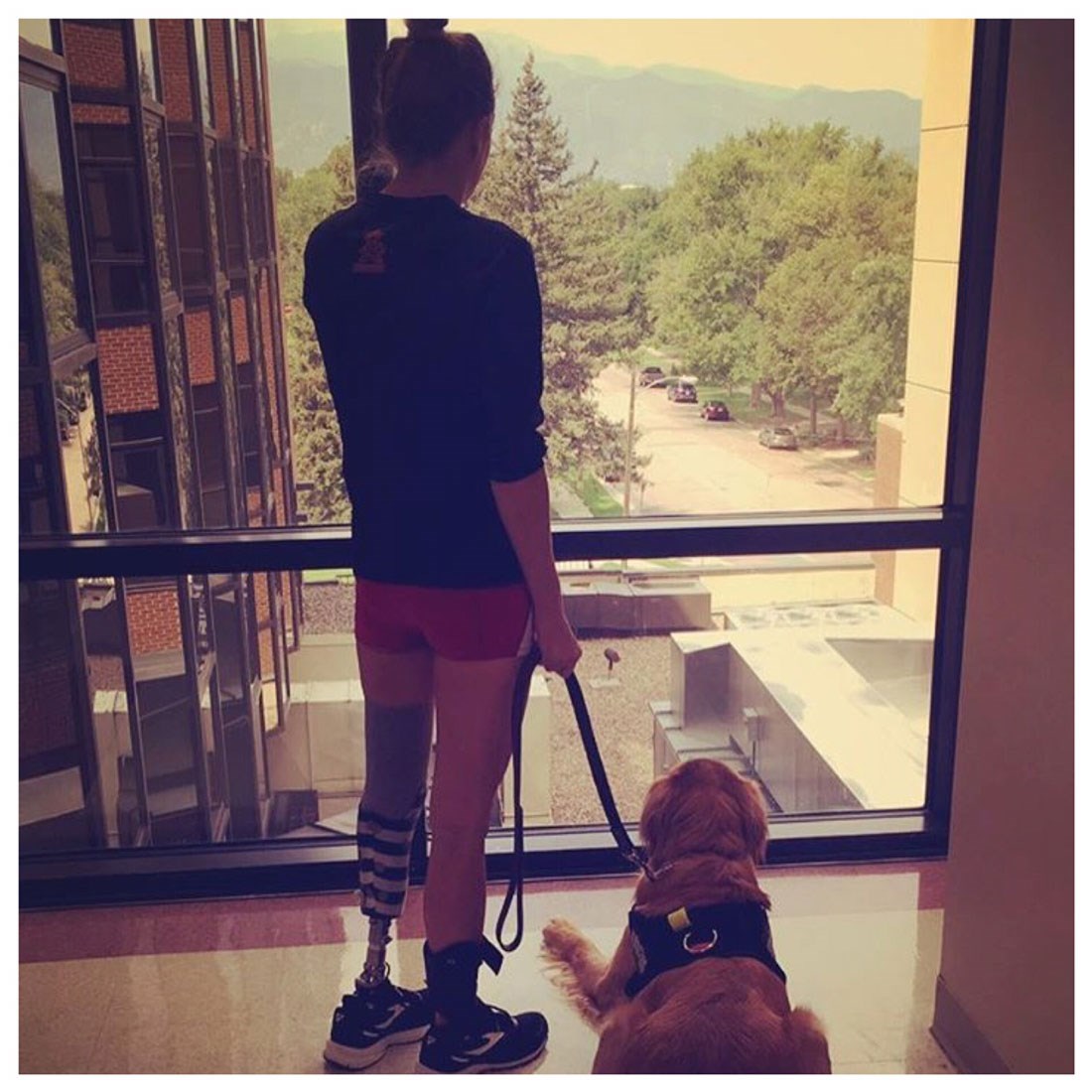 While still in the hospital, I was able to get back on a spin bike, started using stretch cords to mimic swim training, and walked the halls to stay active. I became exhausted and overwhelmed easily. Five minutes, ten minutes, one lap and then two. Frustrated by my weakness, I pushed until I couldn’t push anymore. And by the time I was discharged, I had worked my way up to thirty minutes of easy spinning on the bike.

It was a quiet Sunday morning, the sun was shining on my face and the wind was blowing through my hair when I decided it was time to ride outside. I was nervous, my core still weak, my legs felt wobbly and every little imperfection in the road pierced through my body like a knife. Through the pain, I couldn’t help but smile. I was happy, happy to be doing what I loved once again. Each day that passed got a little easier, the workouts got a little harder and we built momentum.

With three weeks until World Championships, the pain I experienced with every impact on the bike had slowly started to subside and it was time to give running a try. Day after day, I laced up and headed out despite how terrible it felt. I assured my coach, Ken, that running was my strength and I would find my legs quickly. But after a week, I was still struggling to hold a turtle’s pace and discouragement came more easily than ever before.  Maybe I was wrong; maybe the run wouldn’t come back like I had hoped.

Even with doubts, I continued to head out the door. After a week, I could run longer and I dropped a few minutes from my aerobic pace. On a chilly Monday morning, I excitedly headed out to meet Ken and the team for my first group workout. But, my excitement turned to dread when I struggled through yet another run. On my last interval, I asked Ken if this was all a pipe dream. Was it crazy to think I might be able to race at Worlds in two weeks, was it time to throw in the towel and walk away? He quickly answered, “I am not ready to make that call yet and I don’t think you are either.” I now realize what I really wanted was permission to quit. At that moment, I wanted him to see what I saw – failure – instead, he believed in me.

With days remaining until I would need to be boarding a flight to Amsterdam, I was finally cleared to get into the pool. I was relieved and excited for my first swim. I jumped into the water and pushed off the wall, in doing so I felt the scar tissue down my abdomen tear apart. In searing pain, I considered getting out of the pool. Instead, I managed to knock out a few hundred meters before calling it a day. The pool was not the silent sanctuary it used to be; a devastating realization.

Six days before my scheduled flight: decision day. Ken had planned a few test sets to see what my body and my mind could do. I dragged myself to the pool, not wanting to know what the 750m test would show. At 6 a.m. I hopped in and started the set. The first 200m felt as good as I could have expected, but then it got hard. Really hard. I hurt from both surgical pain and physical exhaustion. With every wall, my brain willed me to stop, but something inside pushed back. I hit the last wall, lapped my stopwatch and looked at the clock. It wasn’t good, but it also wasn’t as bad as I thought. A small grin snuck onto my face. I finished the last bit of my set and left the pool happy. I was ecstatic I didn’t quit when my body begged me to. 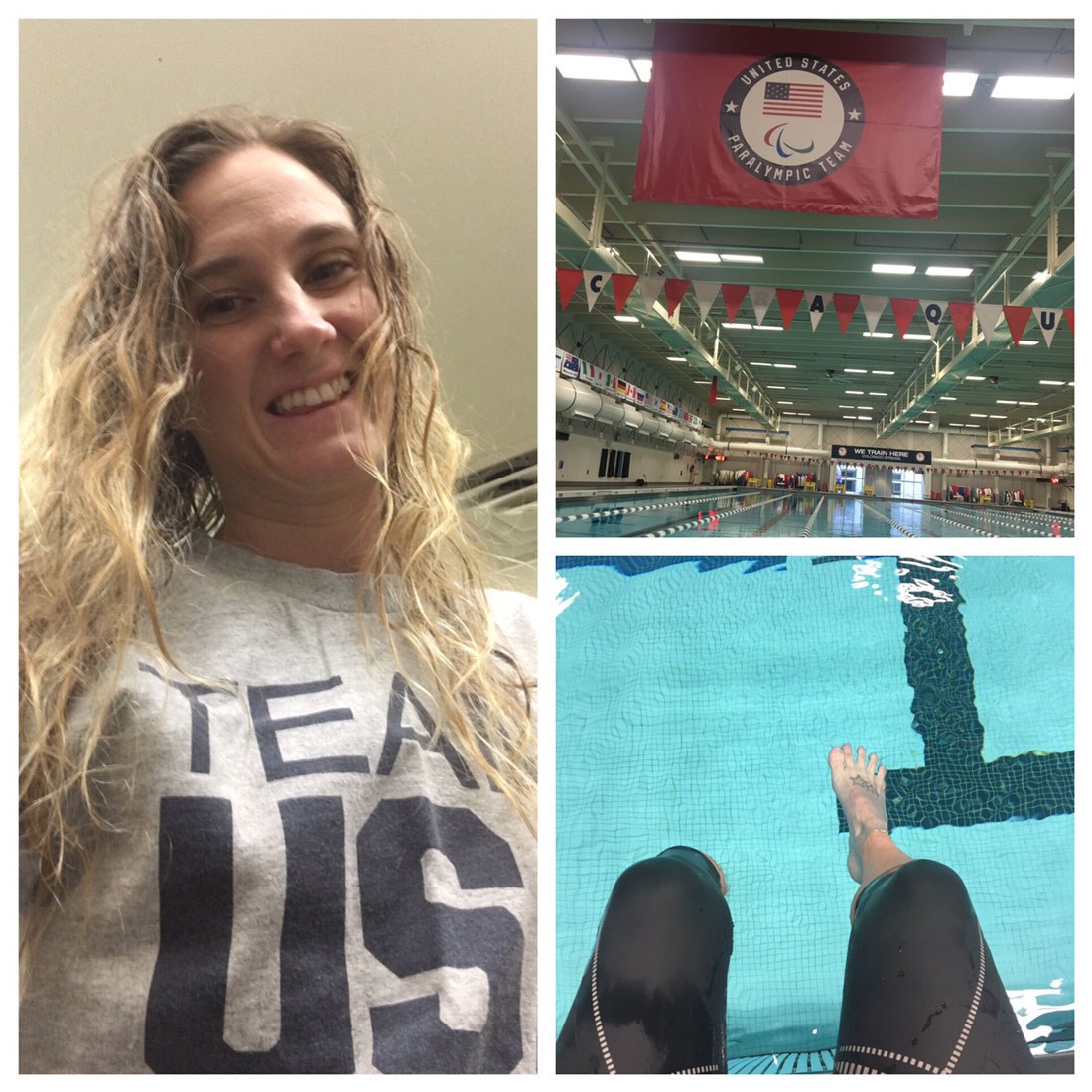 Up next was a race-pace bike effort into a strong run. I was not worried about the bike. I was confident I would hit and maintain the power numbers I needed aboard my Envie Advanced. With each effort on the bike, I was slightly over the power I needed to hold and my confidence grew. When I was finished, it was time to put on my run leg and see what I had. I turned my watch face off, not wanting numbers to cloud my judgment. I went out hard and held on for as long as I could. My watch beeped at 10 minutes, but I couldn’t convince myself to check the stats. I just kept running. Finished, I nervously peered at the numbers. I looked again and again. My pace was within 90% of race pace and – in Colorado – I was at altitude. It was at that moment I knew the race was a go – regardless of if I was at 100 percent. Days later, I boarded the flight to Amsterdam and a bus to Rotterdam for World Championships. 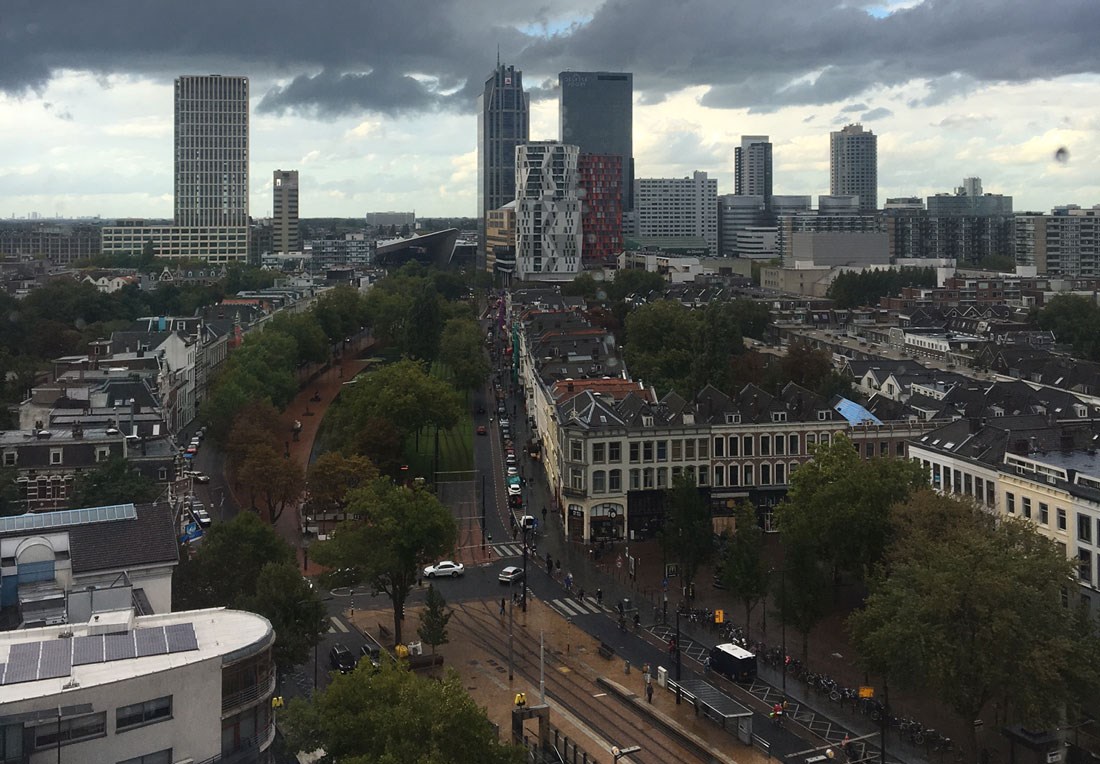 The week leading up to the race was like any other. I got in a few pre-race swims, put my bike on the trainer and ran in the rain.

All week was a test of my mental strength. With each swim, bike and run session I reminded myself there was nothing more I could do. Everyone was asking, “How are you feeling? How is training? Are you prepared?” My answer became, “Good enough.” Two words – so simple – became exactly what I needed. I felt good enough, my training was good enough, my run was good enough, and most importantly I was good enough. My result – whatever it may be – was going to have to be good enough. 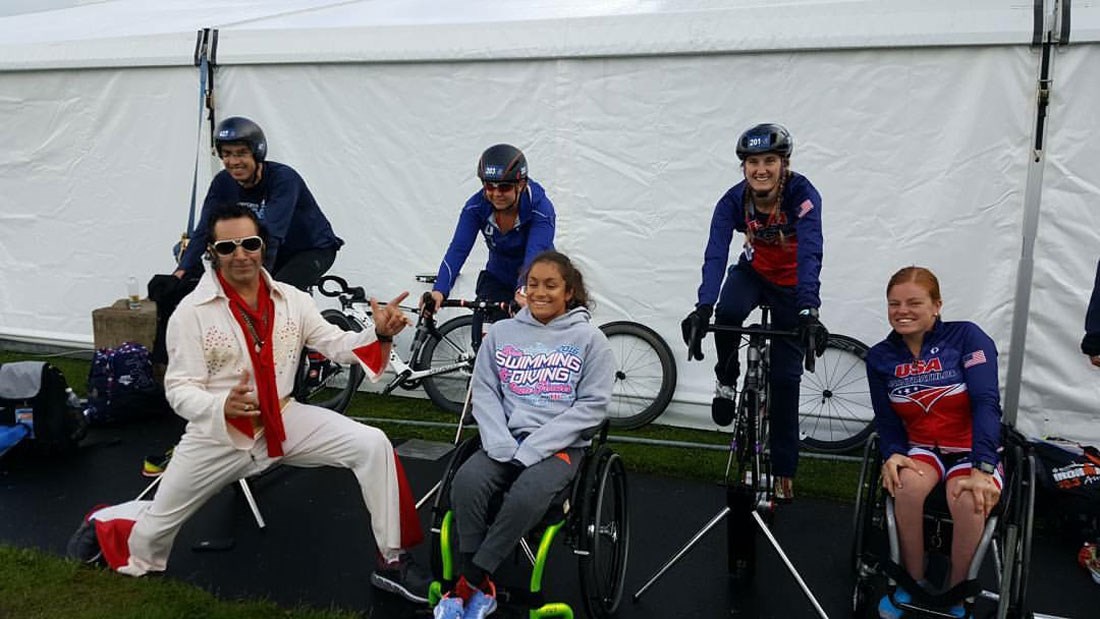 Soon enough, it was race day.

I woke up with a familiar feeling, one of determination. After waking up and getting ready, the race was delayed an hour due to weather. I crawled back into bed and closed my eyes. When my alarm when off for the second time, I grabbed my bag and rode down to the course as the rain fell.

Stepping up to the line knowing I was not 100 percent was the hardest thing I have ever had to do on a race morning. But that challenge came with the excitement of the unknown. That excitement had me ready to take on the world.

The course included a bitterly cold 750m swim in the river, followed by a winding 20km bike course through Rotterdam with nearly 140 turns, cobbles, and wet roads, and finished with a 5km run in pouring rain.

Each athlete was introduced as we walked to the water and in minutes, the gun went off. With no thought, my body took over and for the first half of the swim, I was able to hang with the lead pack. But after about 300m, my lack of endurance became apparent and I lost the group. I focused on each stroke and pushed as hard as I could at the moment. Coming out of the water, I knew I was much farther back than I was used to, but my brain kicked into high gear and my competitive side came out. Running into transition, I was quick to get my helmet and sunglasses on and head out moving up three places. But then I stopped and made a 180. In my flustered state, I forgot to change my prosthetic out for my bike leg. I lost the fifteen seconds and the three places I had picked up, but brushed it off and did not give it another thought. Once on my Envie, I was confident in my ability to traverse the tactical course and my bike’s ability to handle the sharp turns and cobbles with ease. Focusing on my power, pedal stroke and turn lines I was able to pass three of my competitors. When I got to the second transition, I struggled once again, unable to get my bike leg unclipped. After multiple unsuccessful attempts, I ended up taking my leg off and dragging it from the pedal as I hopped to my rack. 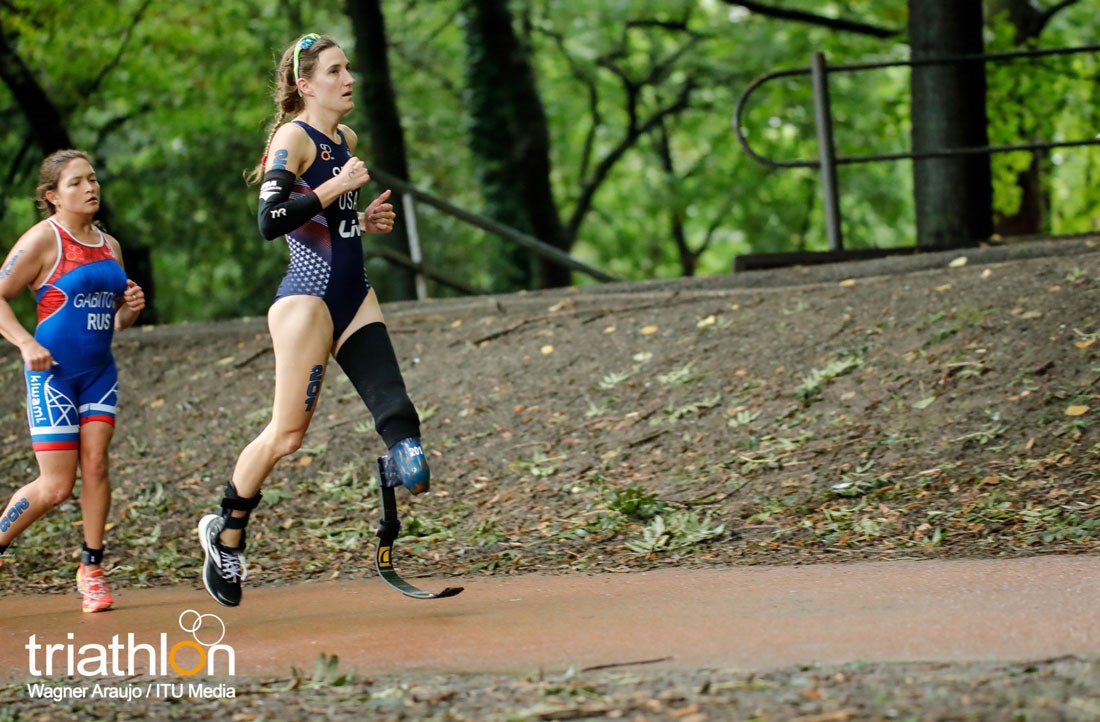 I laced up, whispered, “It’s time to run,” to myself and took off – not knowing where I was in the mix. Ken stood about a half mile into the run course. With a nod, I acknowledged his advice and stayed focused on the task at hand. Stay strong, give everything in each moment and finish the race. I could see my closest competitor in front of me, but I knew I had to stay within my limited means. Instead of charging for her with reckless abandon, I needed to attack consciously to be able to hold my pace for the remainder of the run. I began to close the gap and passed her at the halfway mark. When I started to fade and my legs began to cramp, I reminded myself there was more to be done; I had to keep pushing. Coming to the final 1200m, I finally got a sense of where I was when Team USA staff yelled, “You’re 750m from…” and then they trailed off. I kicked it up a notch. If there was another athlete within reach, I was going to do whatever I could to catch her. With about 300m to go, I caught and passed my next competitor. I crossed the line still unaware of where I finished when Ken’s head popped up over the fence. 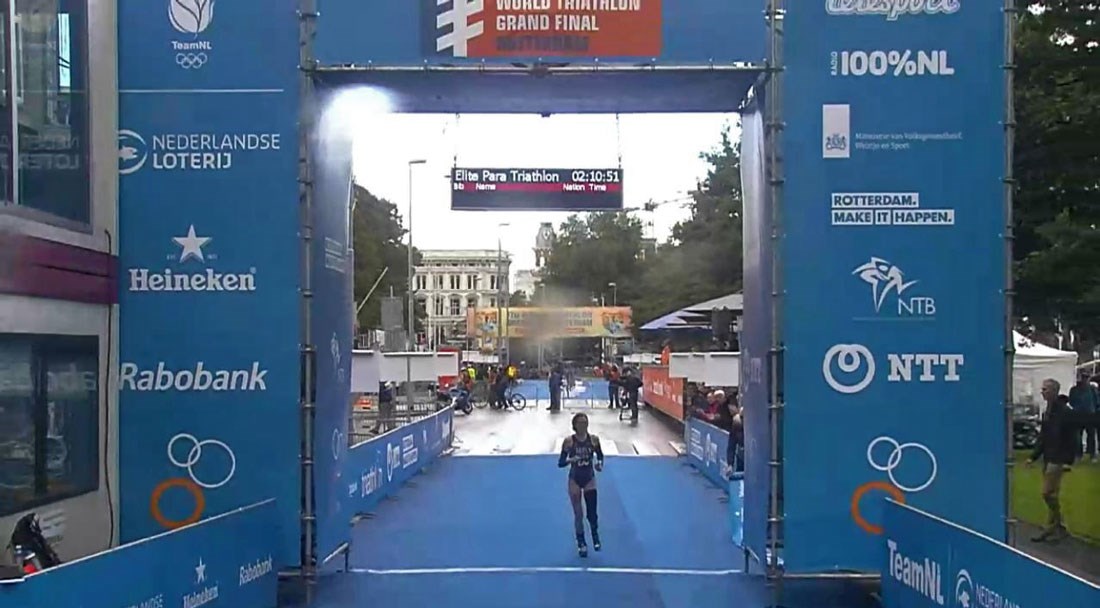 I finished in second… second. Wait! What?!? Second! I looked at him and with labored breath and a smile said, “Good enough.”

Someone once said racing is 99 percent mental and 1 percent physical. I used to think that was preposterous, but upon further examination maybe, just maybe they had something there.

For all the things that went wrong the weeks and months leading up to World Championships, even when my body was not 100 percent, my mind remembered the job it was supposed to do. My race was not nearly perfect, but it was good enough. I am proud of the effort I was able to maintain and the areas in which I exceeded. I am learning from my deficits and I’m taking those lessons home.

I was honored to stand on the podium at World Championships and represent the USA, but not hearing my national anthem lit a fire of motivation within me. I will come back with a vengeance next season. For now, I will head back to Colorado to see my dogs, finish healing and recovering. Then I will focus, rebuild and come back stronger – physically and mentally. 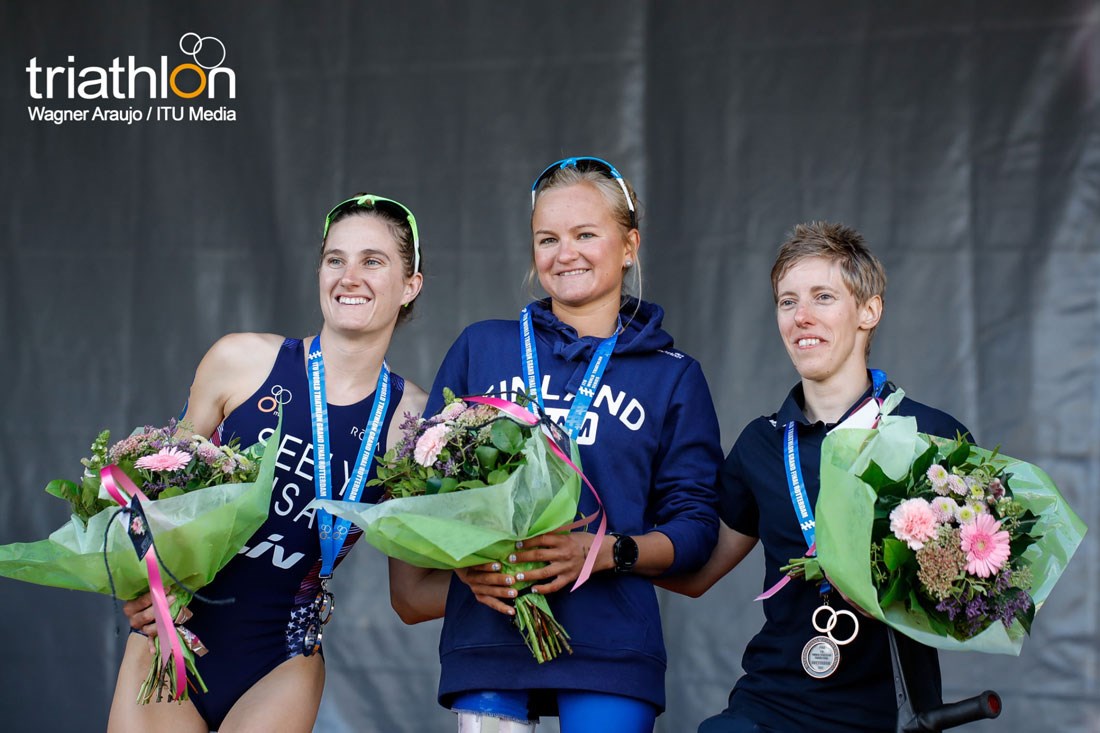