Actually, I Can Make a Comeback 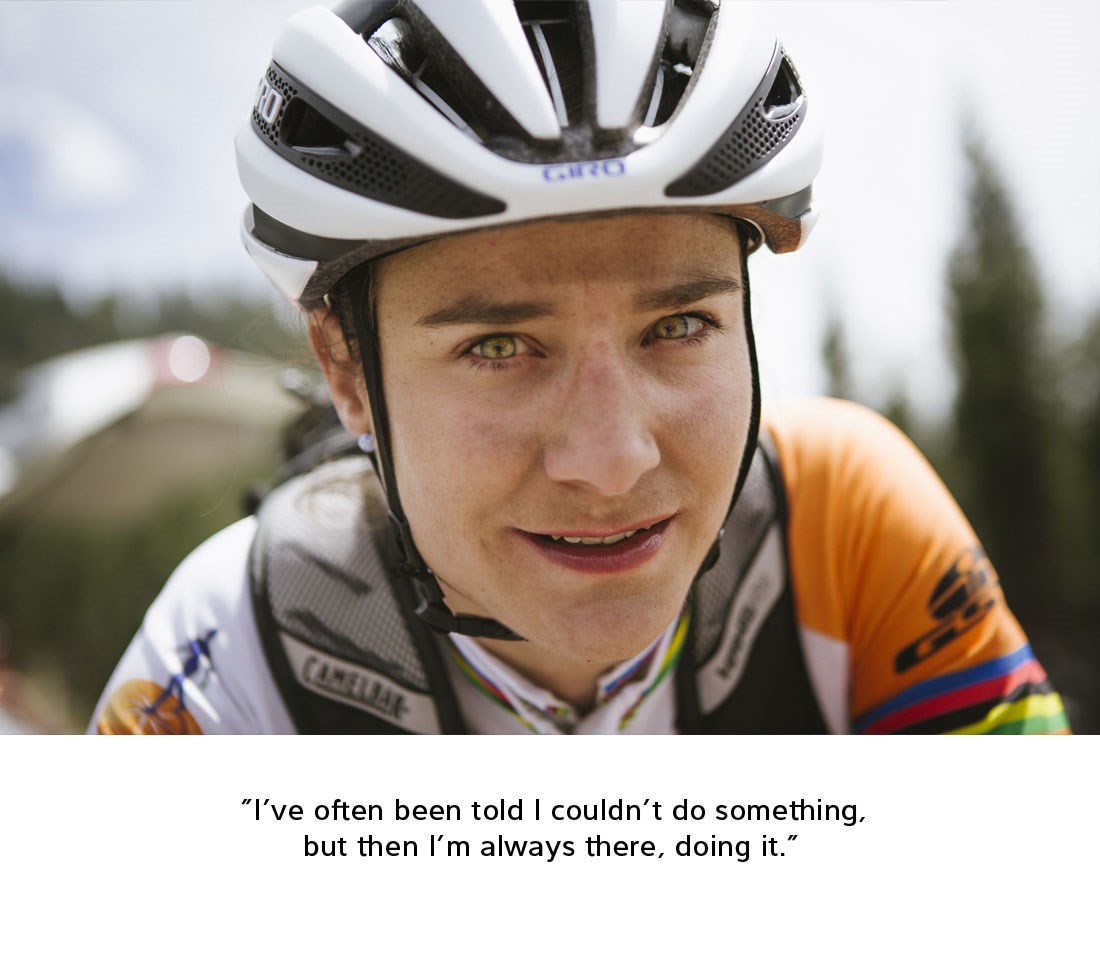 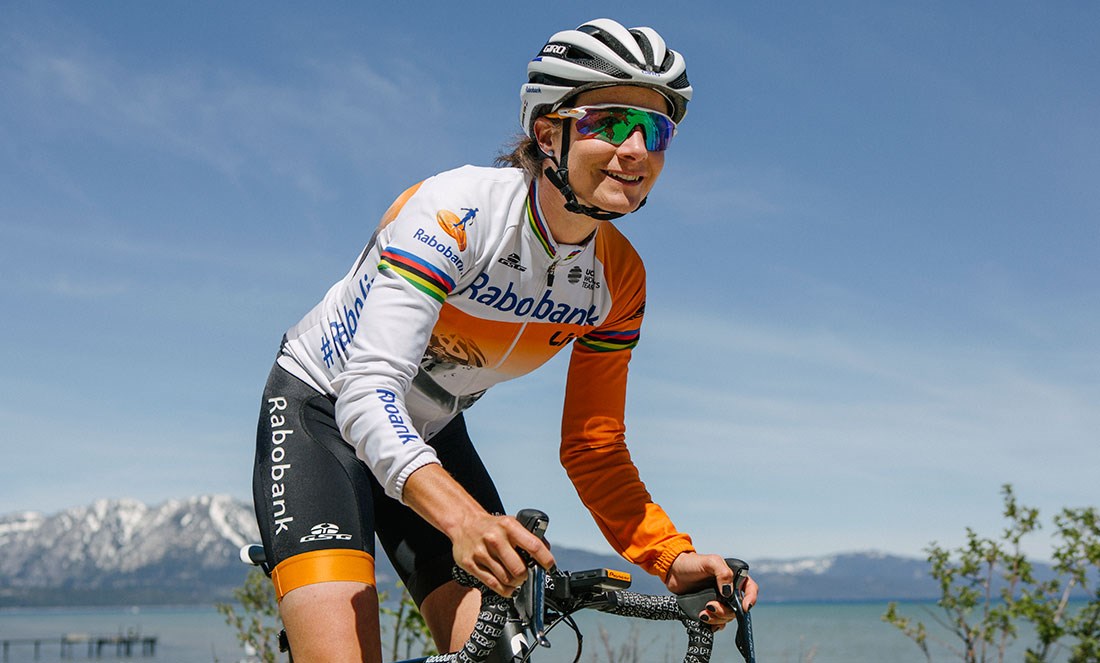 Marianne Vos is known as the finest cyclist of her generation. She has 12 elite world titles and two Olympic gold medals to her name. She has raced her road, cyclocross and mountain bike to victory well over 300 times. 2016 marks her 10th year as a professional cyclist, one that is already off to an impressive start with a slew of race wins and podium appearances, like her exciting stage win (and top 5 overall performance) at the Amgen Tour of California.

She seems fresh, rejuvenated even. If you didn’t follow cycling, you could never tell Marianne is coming off of her most personally disappointing professional season. 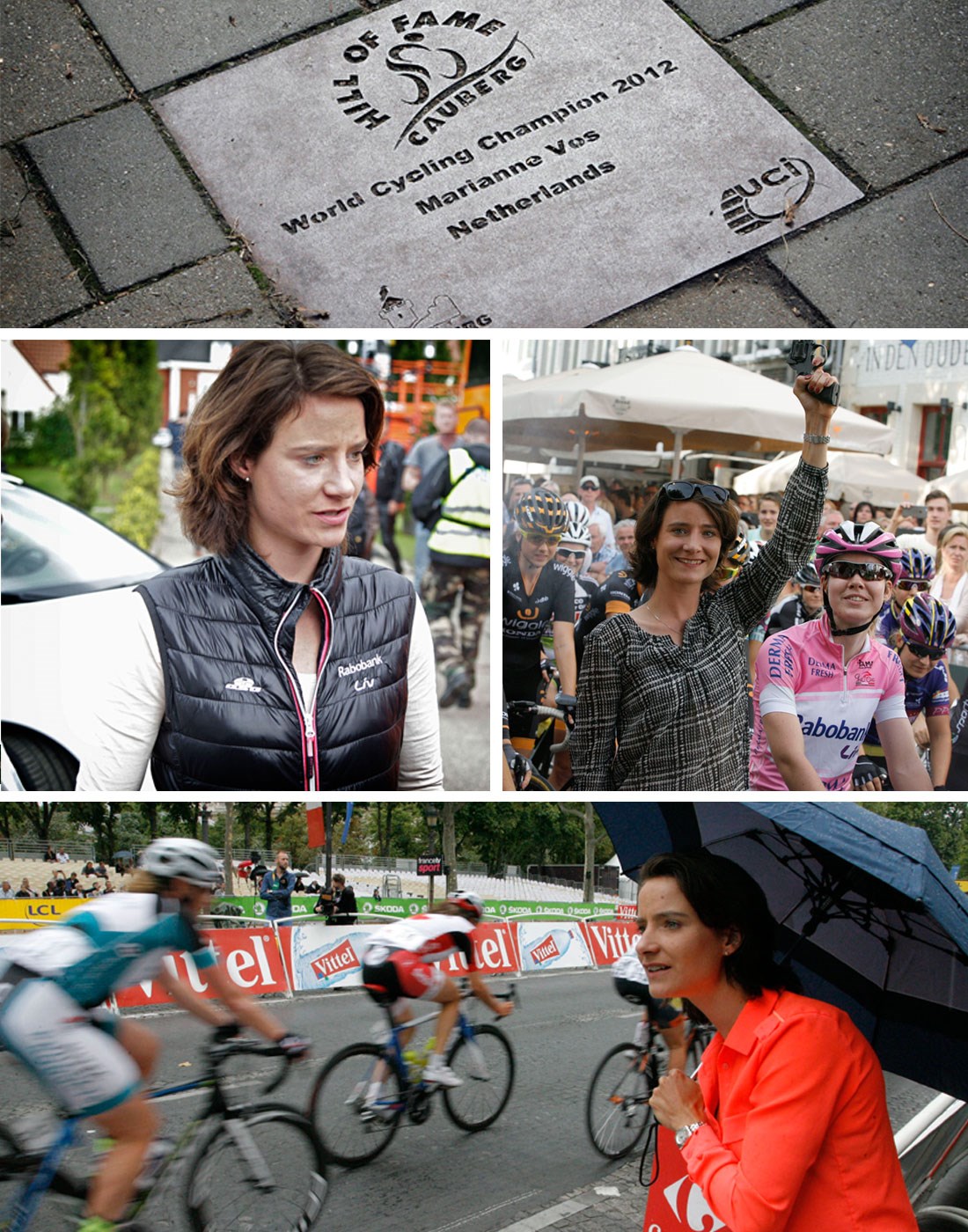 A cyclist since she was a 6-year-old girl, Marianne grew up identifying—and being identified—as an athlete. She has always had a fierce drive to do as well as she could at everything. Luckily for her, her best was often the best.

And over the last 10 years, Marianne has also been lucky to never suffer serious injury. Even a potentially season-wrecking broken collar bone in 2012 didn’t derail her trajectory. After 10 days, she was back on the bike. That same year, she went on to win pretty much everything, including the World Cyclocross Championship, Road World Championship and the London Olympic road race.

For Marianne, 2015 was a journey into the unknown: not knowing how or when she would recover from her phantom injury, not knowing how to identify herself as something other than “athlete”, not knowing what to do with her time, and not knowing if she would ever return to her previous form and race at the top level.

“Everyone wants to help. Everybody is asking, ‘How are you doing?’ Every time I had to say, ‘I’m doing fine… but not too good.’ So, what is the problem? Yeah, what is the problem with over-training? I have never been over-trained before, so I had no idea how to deal with it or how to be patient. I didn’t have any answers. That was difficult, because everyone wants to know what happened exactly. Maybe it is easier just to explain, ‘I broke my leg and in six weeks I’ll be good.’ What happened? How long will it take? I had no idea.”

Those questions—and not knowing the answers—sent Marianne packing. She had to find solace, time to think, and much-needed rest. For her, those are things best done alone.

“I’m an introverted person. To charge my batteries, I go out on my own. I train alone, I ride alone. It is not only the training, but that mental part that is really important for me on the bike. Just to organize my mind again and to get fresh and just to find that energy and spirit again.” 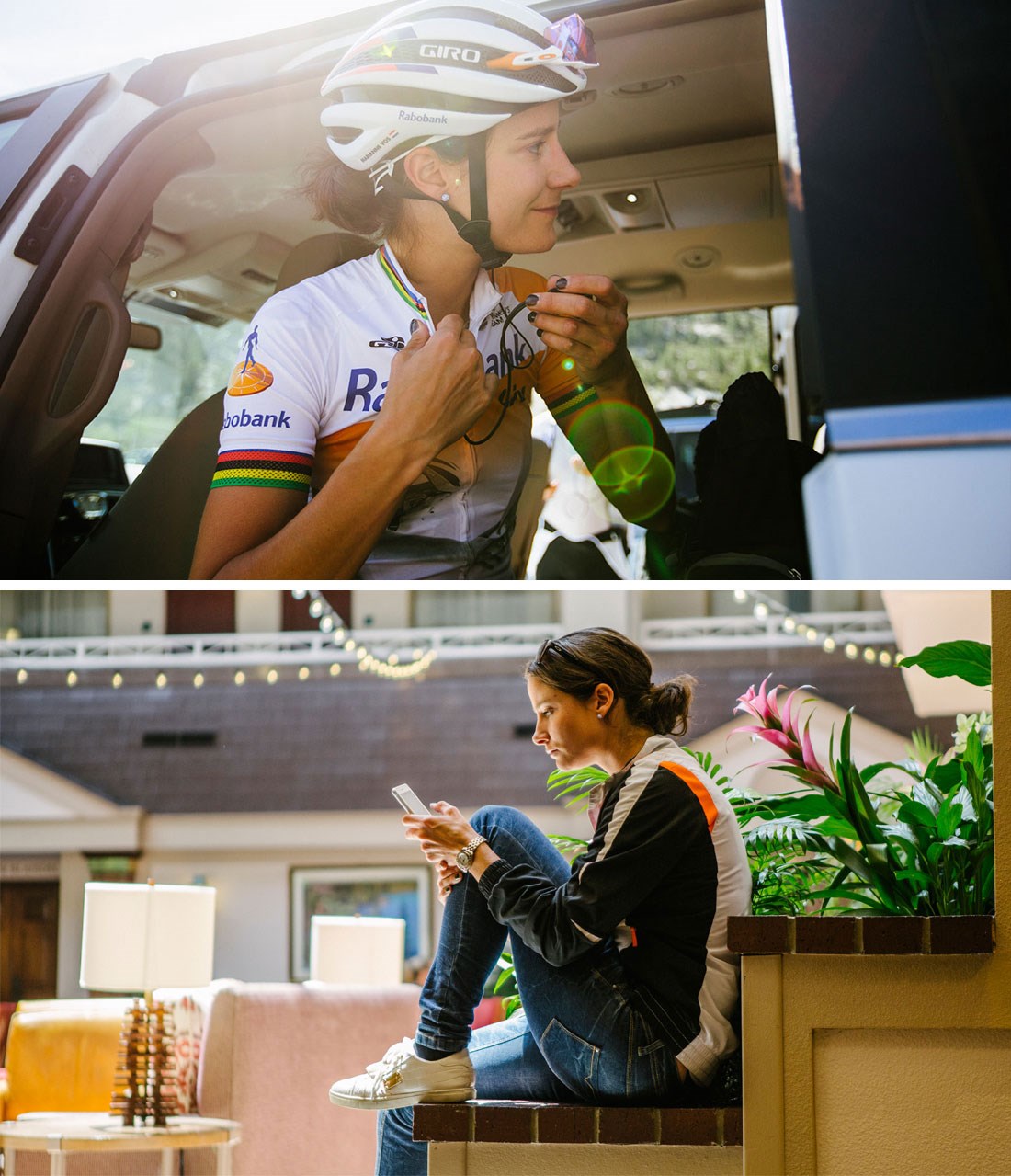 Although Marianne did not step totally out of the world of cycling while she was injured, she did take a couple steps back. During the race season you could see her on the sidelines, cheering on her teammates, attending events and being a voice for women’s cycling advocacy groups like Strongher: The Stage for Women Who Ride. Marianne had to fight an internal battle: who would she be if she was no longer an “athlete”?

“I know I am more than only an athlete. But in the end, the things I have identified as have been my racing and my results. That is how I have identified myself. First, I had to accept that I had to rest. I felt a little useless every day, but I decided that, I have been told to rest, so I will be the best at resting and recovering.”

Marianne listened to her doctors, she read, she rested, she was a cheerleader for her RaboLiv teammates, and she even knocked some items off the bucket list.

“I have always wanted to ride a moto, so I started with that. Yeah, I have had that mid-life crisis at 28. It was a good experience, but I still like my bike more.” 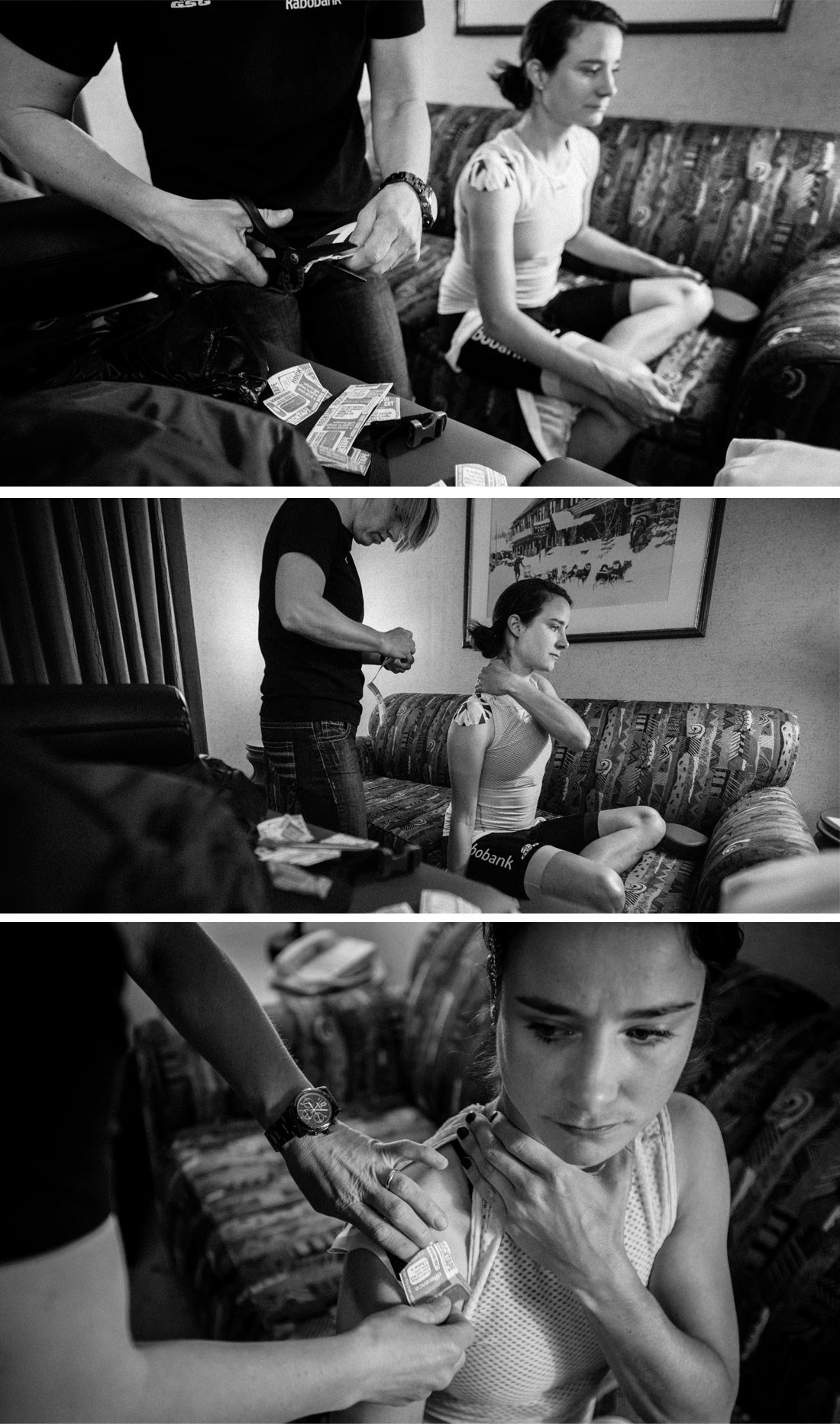 The return to training was a slow process, like easing in to an ice bath. You don’t do it all at once. Instead, you slowly lower yourself in and maybe even come out completely a couple times because it is just too cold. Even when you are all the way in the icy water it is painful—almost unbearable. Then your skin starts to numb and it is tolerable. You stick it out, because in your mind you know you will emerge better than before.

As Marianne says, she was waiting a long time for the doctor’s “green light”, but as it turned out, “the green light was not really green… it was more yellow.” It was that yellow light that kept the uncertainty lingering for a little longer than she would have liked.

“I had my doubts, of course. I had been on the highest level for a long time and I was down. You can be whoever—you can be Marianne Vos—but if you are off the bike for half a year or longer, then of course it isn’t that good anymore.” 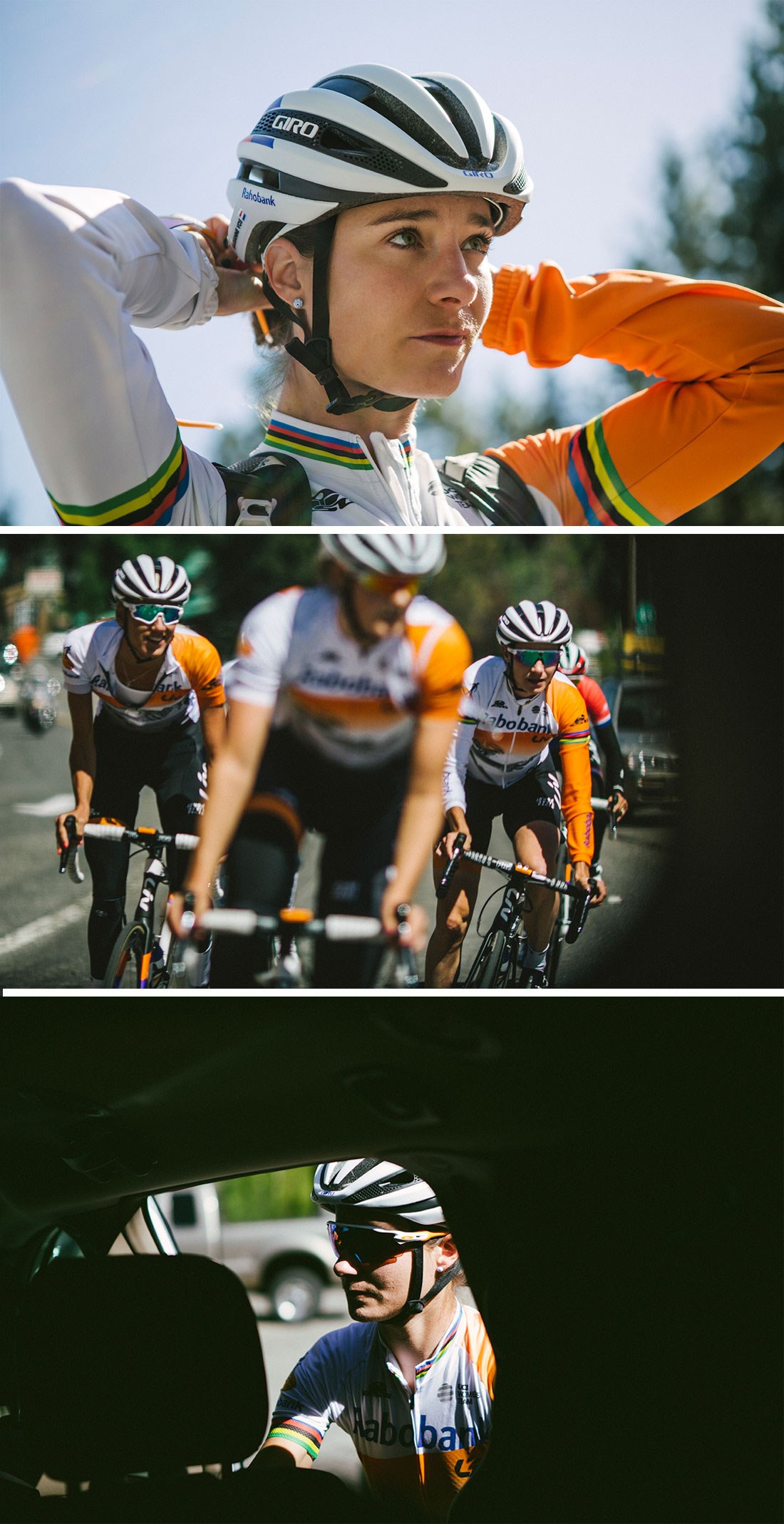 It’s like riding a bike, right? Not exactly. Marianne had to be content to just ride again. For a multi-time world champion and Olympic gold medalist, that is easier said than done. But she pushed herself past those doubts and past the doubts of others with the help of her teammates, the moral boost that RaboLiv gave her and by her coaches, who kept believing. After fighting with her own patience, Marianne held onto her faith in her own ability.

“The beginning wasn’t easy, but it was so good to be back on the bike and to feel that rhythm come back. I felt like, ‘Yeah, I’m getting there!’ I felt more and more like an athlete again. The first races—I was good enough to hang in there. And with those little steps, every step feels like a big win. That is something new to feel.”

2016 may have started slowly, and perhaps Marianne is still not where she wants to be. But, she is continuing to push herself to ride as good as she can. She is learning to find a balance between the “good pain”—that familiar burn of training to be the best—and the “bad pain”—what she felt for the first time while being injured last year, which was an uncomfortable mix of mental and physical anguish. She is still met with doubt, from the media, her competition and from herself. To anyone telling her she can’t, Marianne says:

“I’ve been told I couldn’t do something often, but then I’m always there doing it. Last year, I had my doubts, but I have never been to the point where I want to quit or stop. With one set-back give up? No. If people say it’s not possible to come back, then I am going to fight that.” 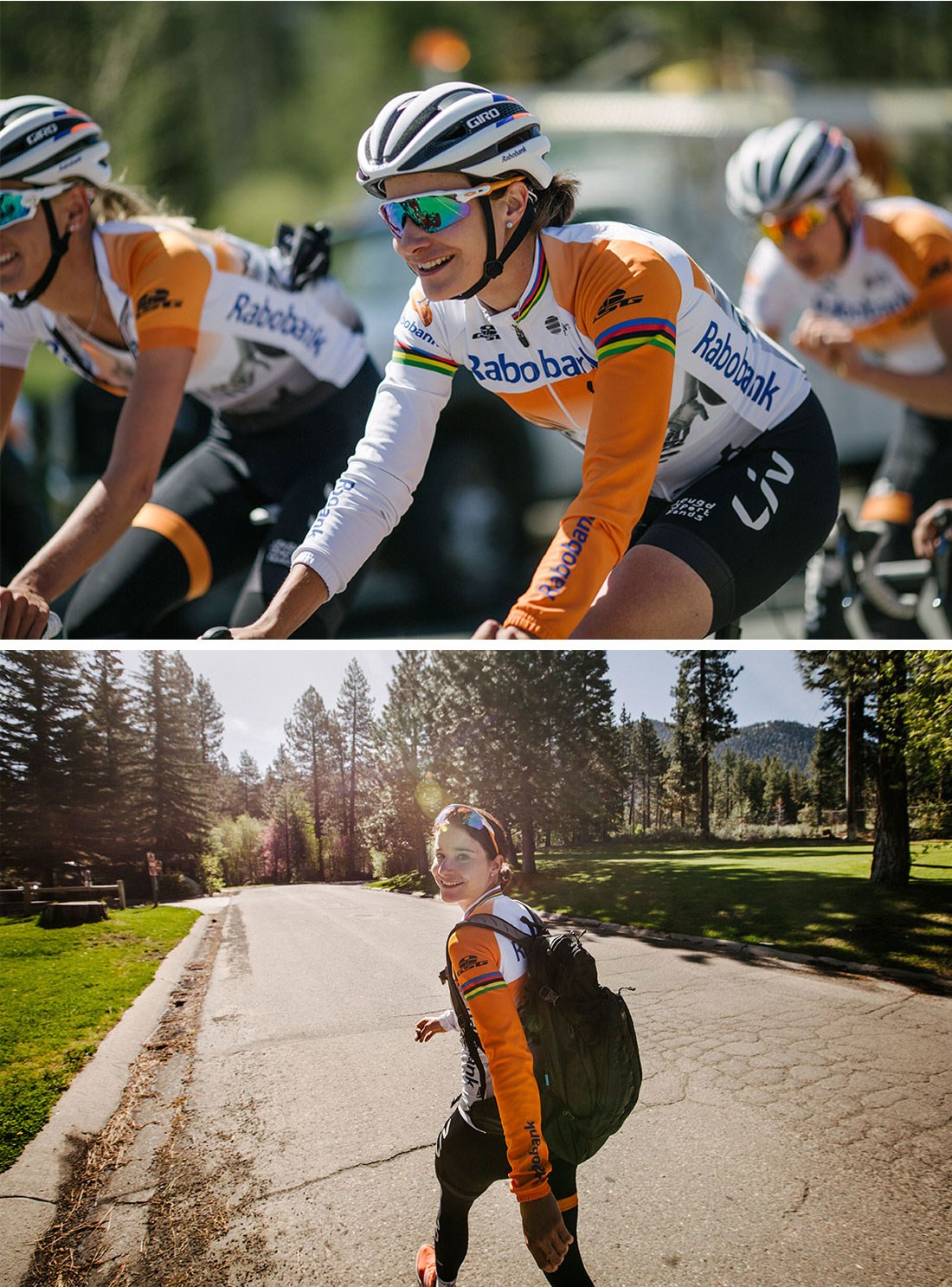 So, what does Marianne Vos say to herself in those moments of uncertainty? When the voices in her head may be whispering “Actually, can I make a comeback?” There is this quote—a motivational mantra—that helps her find her direction and throw doubt out the window.

Success is not final, failure not fatal; it’s the courage to continue that counts. – Winston Churchill

When all things go well, it is easy to keep going. I have had these periods, of course. It is fantastic to be in that flow. But, now I realize even more how special that was. It makes these periods and being able to race on the highest level even more special.” 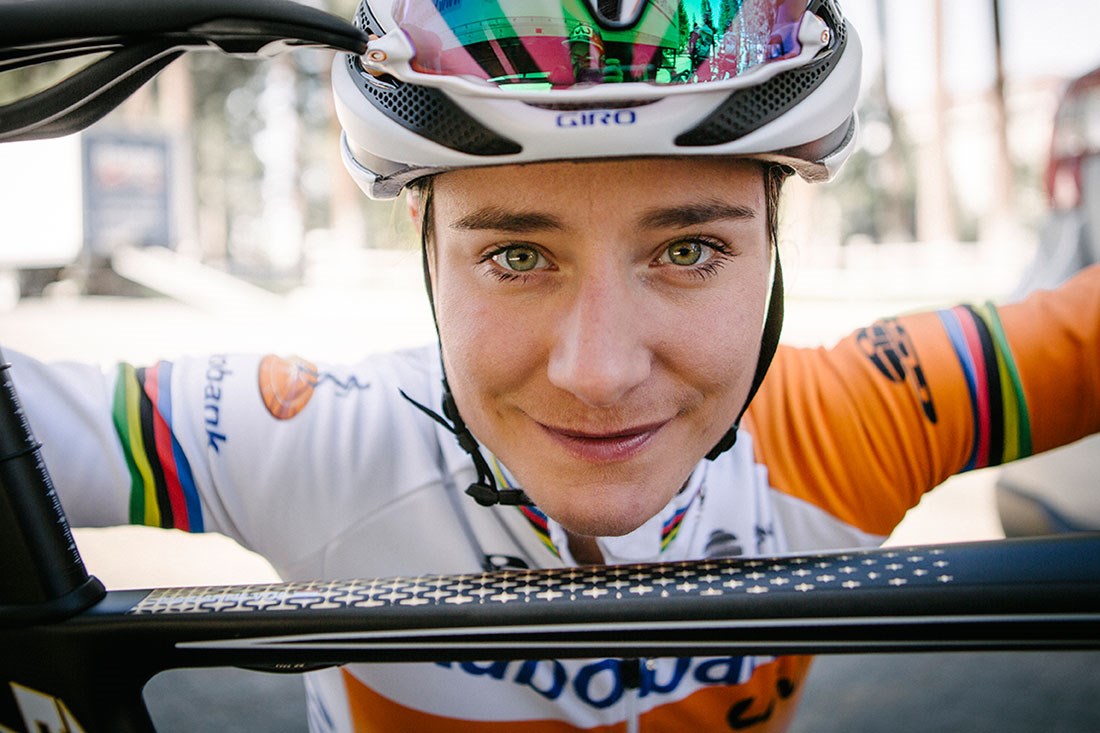 Photo essay by Jeff Clark Photo. Marianne Vos interviewed by Liv Staff prior to the Amgen Tour of California.

Giant / Liv Cycling is in no way connected to Rio 2016, the Olympics or Paralymic Games.