Rides, Stops, Eats, & Sleep: A Guide to Biking in Portland, OR

If you’re lucky enough to live in Portland, there’s a plethora of women’s centric bike organizations all aimed at getting more women riding. There’s a group called Komoorbi, which is dedicated to bike touring and getting women outside to enjoy riding for the sake of fun and adventure. Then there’s the Portland Society, specifically geared towards women who want to multitask by talking business, building careers and making Portland an awesome place to ride and live. There’s a cyclocross group, the NW Trail Alliance, Women on Wheels, the Bike Transportation Alliance, and an awesome organization called Let’s Ride Bikes, which hosts tons of clinics and community events geared at getting more women into road racing. Epic.

If you don’t live in Portland, but are coming through town and looking for some awesome places to ride while getting your urban adventure on, look no further. Here are some of our favorite places to eat, see, stay and explore by bike in Portland. Behold, Liv's guide to biking in Portland.

First things first, if you don’t already have a bike, be sure to visit our friends at River City Bicycles. They have tons of awesome bikes for whatever type of riding you plan on doing and are super friendly as you browse the shop. 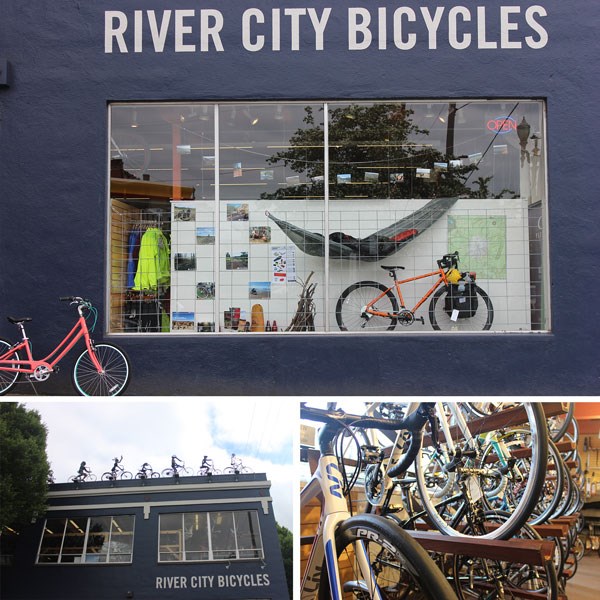 If you’re in the NE, head to NE 29th and Alberta, and stop in at Gladys Bikes. One of just two women’s centric bike shops in the US, Leah will instantly make you feel comfortable and spend a ton of time listening to your specific needs. Seat not feeling quite right? Then check out their ‘Saddle Library’, a truly awesome program that allows you to try different saddles for a week at a time, then swap it out until you find just the right fit.

Now that you’ve got your wheels, it’s probably a good time to call mention a few tips for riding in Portland.

Tip #1: Make Use of Bike Routes

Portland has some well established inner city bike routes that are perfect for commuting and getting around town. Marked by wide lanes and generally less vehicle traffic, they’re perfect for exploring the city, so be sure to check out the Portland Bike Route Map as you plan your voyage. 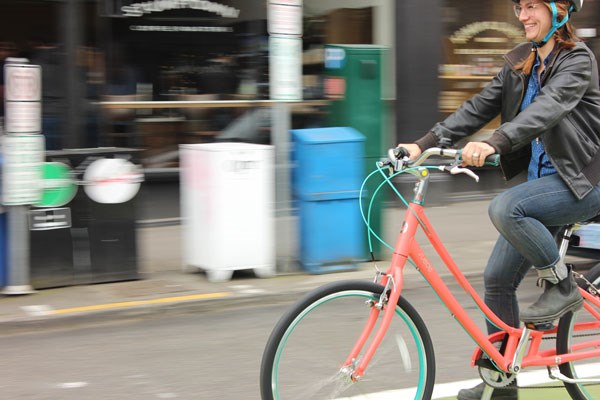 Portland earned it’s name name ‘Bridge City’ for a good reason. While there are quite a few bridges that cross the Willamette River, which separates the east and west sides of the city, some bridges are more bike friendly than others. In September, the long awaited beautiful Tilkium Crossing bridge will open, which will connect bikers, walkers and the Max rail between SE Portland to downtown Portland.

Our favorite bridges include the Steel Bridge, which connects at the northern part of the downtown Waterfront Park Trail (near NW Flanders & Natio) to the northeast side of Portland near the Moda Center area. We like this bridge because it’s lower tier is specifically designed for bikers and pedestrians.

Bike boxes are large green boxes designated for bike traffic to get green lights at busy intersections. These areas also allow for bikers to wait for green lights in a safety zone away from cars. If a car is already waiting in at that light, it will trigger the light sensors for you. 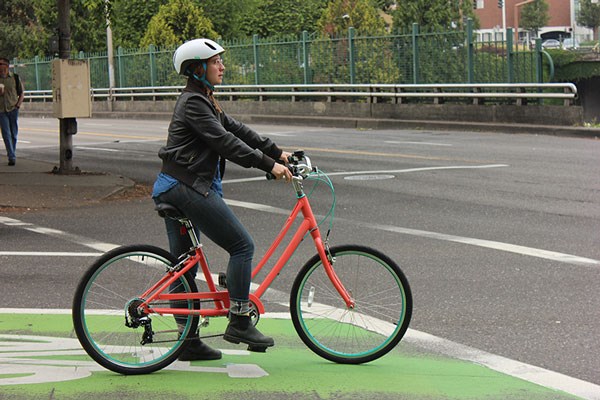 Tired? Too late to bike? Caught in the rain? Have no fear. Portland’s bus system allows you to put your bike on the front of the bus and catch a ride to your destination. Should you need it, here’s a map of Portland’s TriMet bus line.

Portland is so beautiful, and so green. That green will only cost you a significant rainy season. Luckily, Portland has bike lockers scattered throughout the city so if you’re worried about getting stuck in the rain, you can keep your bike safe and dry in a bike locker and wait out the rain in your favorite coffee shop or bar. Here’s a map of where you can find those bike lockers.

Now that you’ve got your wheels and you know where you’re going, it’s time to indulge in what Portland does best - eat. Portland is overflowing with awesome spots to chow. From coffee shops to food trucks, to 5 star gourmet affairs, there’s something for everyone to write home about. If you’re downtown and want to grab a Machiatto in a cool spot where the baristas REALLY care about how you’re enjoying your drink, head over to Courier Coffee for some equally killer people watching.

If you’re more in the large breakfast mode, you can saddle up at Tasty and Alder.  Be warned, lines can be super long, but there’s a reason so many people love it.

Hunger striking a little closer to lunch? Head to the largest cluster of Portland food trucks on Alder & SW 10th Ave. Some of our favorite trucks include THAI, ONE ANNA SAID, CHICKEN SAND, GRILLED CHEESE. If you’re on the east side of town, you can find several awesome clusters of  food trucks scattered throughout the city. You can find a map of all of Portland’s food trucks here.

Another favorite of ours is Grassa, which boasts irresistible bowls full of handmade pasta, delicious salads and a spot on drink selection.

If it's later in the day and you’re on the east side of town, we like grabbing bites and brews at SideBar, Hopworks and the Lompoc Brewery, all of which are on Williams Ave, which is a major bike corridor full of great restaurants, shops and bars. We’re also big fans of Life of Pie, which serves up insanely delicious wood fired pizzas! 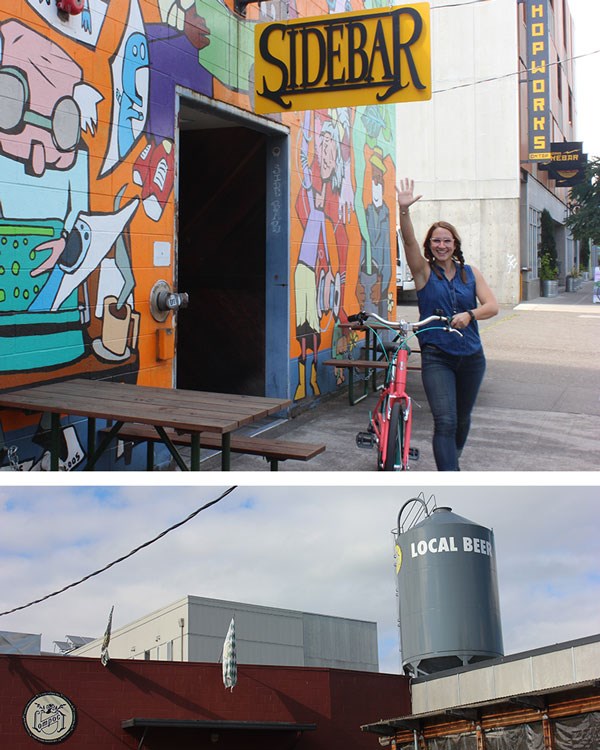 If you’re in SE Portland, grab a taco at Robo Taco or a sandwich at Bunk on Morrison & SE 6th Ave. For those seeking an ultra hip night time spot, head to the White Owl Social Club for some drinks and delicious vegan cuisine, if that’s your thing.

Ready to take in a flick while munching on some pizza and beer? Head to the Hollywood Theater on NE Sandy Blvd. We love this beautiful spot for their indie film festivals, including our recent favorite - the Filmed By Bike film fest, which featured our very own Shannon Galpin’s latest Liv Beyond project.

If you’re already on your perfect ride and ready for some window shopping, there’s a few must stop shops downtown that you should check out. Some of our favorites include design centric Canoe, which is full of can’t-help-but-want-to-touch-everything home goods and life tools. 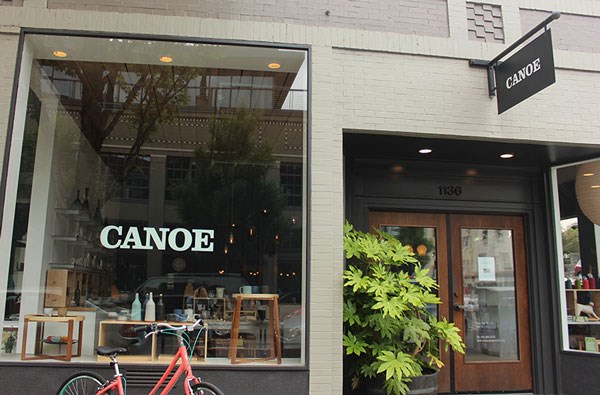 Looking for something made in Portland? Look no further than Bridge & Burn, a local shop carrying super well made mens and women’s clothing.

Other favorite shopping spots include Steve Allen, full of awesome clothes and accessories, and it's just across the outdoor hall from Will Leather.

No downtown shopping excursion would be complete with out an obligatory stop at Powell’s City of Books, the largest new and used book shop in the world. With over a million titles, it’s the perfect spot for hard to find and out of print titles. 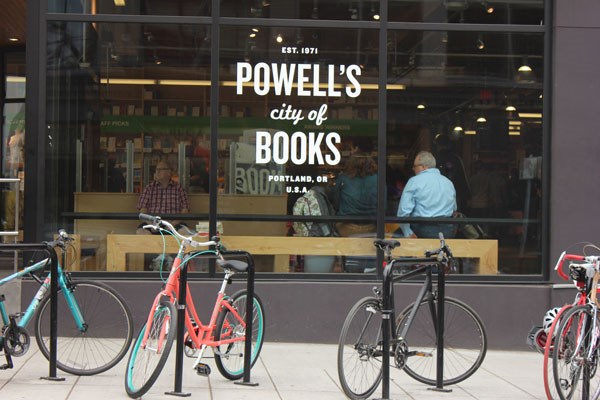 Tired? It’s been a busy day. If you’re located downtown, The Ace Hotel is a favorite amongst hipsters and puts you right in the center of tons of great shopping and dining. The artsy rooms are eclectic and interesting, many of which have large walls covered in custom original artwork.  The rooms are set up well for bunking up with a few friends and the lobby boasts a selection of bikes to borrow. On your way out, stop by the attached Stumptown coffee for a mean cold brew.

If you’re looking for a place a outside of the downtown hub, but still super close to the action, try the RiverSide Hotel. We love it because it’s right on the river, has free  guest wine and beer tastings every night and the customer service is top notch.

Well that’s a wrap friends! We hope you have as much fun as we do exploring Portland by bike. If you have suggestions of other places you’d like us to explore, shoot us an email and we will add it to our upcoming travel itineraries!